“While no single step can reverse the effects of climate change, we have a moral obligation to future generations to leave them a planet that is not polluted and damaged.” – President Obama, June 2013 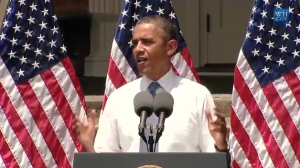 President Obama’s Climate Action Plan is pretty clear in establishing that if we don’t act now, our kids will be living on a different planet.

But since the release of his administration’s plan in June 2013, has Obama made strides in developing a clean energy economy and protecting the environment by fighting climate change?

Let’s take a look at his five-pronged approach to acting on climate: deploying clean energy; building a 21st-century transportation sector; cutting energy waste in homes, businesses, and factories; reducing other greenhouse gas emissions; and leading at the federal level.

First up is deploying clean energy. A major part of accomplishing this goal is first looking at power plants, the largest source of carbon pollution in the country. The U.S. Environmental Protection Agency first announced proposed carbon standards for new power plants in September 2013. Future power plants will have to adhere to these national carbon pollution limits. And just last month, the EPA made history by announcing the first-ever limits on carbon pollution for existing power plants.

Under the EPA’s Clean Power Plan, states are given flexibility to meet individual emissions targets with an overall goal of cutting carbon pollution nationally by 30 percent below 2005 levels. Electricity generated by renewable sources such as wind and solar doubled during Obama’s first term, but the Clean Power Plan needs to continue the momentum. With that in mind, Obama hopes to redouble electricity generated through wind and solar by 2020. Utility-scale renewable energy is becoming more of a reality even with the reasonable, perhaps conservative guidelines of the Clean Energy Plan.

Seeing as it is 2014, Obama also wants to build a 21st-century transportation sector. The EPA and DOT are working to update heavy-duty vehicle fuel efficiency and greenhouse gas standards by March 2016. Implementing standards for heavy duty vehicles would build on the benefits of the fuel economy standards set in 2011, cutting emissions by 270 million metric tons and saving 530 million barrels of oil. Commercial trucks, vans, and buses are the second biggest polluters in the transportation sector, presumably behind passenger vehicles. Speaking of passenger vehicles, fuel economy standards for passenger vehicles now require an average of 54.5 miles per gallon by 2025.

It seems like carbon dioxide has stolen the show, but what about other greenhouse gas emissions? What’s being done to stop hydrofluorocarbons (HFCs) from doubling by 2020 and tripling by 2030? Who’s working to make sure methane levels that don’t increase to the equivalent of 620 million tons of carbon pollution by 2030 (despite the fact that, since 1990, U.S. methane emissions have dropped by 11 percent)?

HFCs were used to phase out ozone destructive chlorofluorocarbons (CFCs) and are found in refrigerators and air conditioners. While HFCs do not deplete the ozone layer, they have a high global-warming potential and are sometimes referred to as “super greenhouse gases.” Under the Clean Air Act, the EPA is working to ban the most detrimental HFCs and develop suitable replacements.

The federal government’s plan to reduce methane emissions also takes a multifaceted approach. Just last month, the EPA announced its plans to strengthen air pollution standards for new municipal solid waste facilities, the third largest source of methane emissions, by requiring them to capture 13 percent more landfill gas than previously dictated. Under the EPA’s plan, landfills would need to capture two-thirds of methane and air toxin emissions by 2023. To cut methane emissions from agricultural operations, the second largest source of the potent greenhouse gase, the USDA, EPA, and DOE released their “Biogas Roadmap” of voluntary suggestions to implement methane digesters. Apparently using a bottom-up approach in going from lower to higher emitters, the EPA has yet to build on voluntary programs in the oil and gas industry, which is the largest source of methane emissions. Methane regulations may be considered later this year, but would not be finalized until the end of 2016.

On to cutting energy waste in homes, businesses and factories. Ideally, we’d all want energy that’s both reliable and affordable. Groups like Appalachian Voices have demonstrated that energy efficiency is both the cleanest and most cost-effective method to reduce pollution, grow our economy by creating thousands of jobs, and save money for families and businesses.

The Climate Action Plan and the Better Buildings Initiative imagine that commercial and industrial buildings will be 20 percent more efficient by 2020. In Obama’s first term, DOE and HUD helped more than two million homes become energy efficient. The DOE is also finalizing conservation standards for appliances and equipment that would help customers save more. Finally, the USDA recently announced it would allocate approximately $250 million to developing energy efficiency and renewable energy for commercial and residential customers in rural areas.

By virtue of all the stakeholders mentioned above, President Obama believes the federal government must lead the charge towards a cleaner future. Last year, he signed a Presidential Memorandum dictating renewable sources make up 20 percent of the federal government’s electricity by 2020. By working with the U.S. military and other federal agencies, he hopes to lead by example and prepare the U.S. for the impacts of climate change. The U.S. Geological Survey plans to spend $13.1 million to develop three-dimensional mapping data to respond to weather disasters. And the Bureau of Indian Affairs is allocating $10 million to teach tribes ways to adapt to climate change.

Even with these initiatives, the road to energy efficiency and clean energy won’t be easy. Considering that Obama’s Climate Action Plan was announced just last year, historic work is starting to move the United States to a sustainable and stable environment. It’s a start, but we certainly have miles to go.