Yesterday there was a hearing in Franklin Circuit Court for our ongoing challenge of a weak settlement that the state of Kentucky reached with Frasure Creek Mining. The settlement is a slap on the wrist that lets Frasure Creek off the hook for thousands of violations of the Clean Water Act, and it bears a striking resemblance to the settlement between North Carolina and Duke Energy that has come under scrutiny after the company’s coal ash spill into the Dan River.

It seems that there is a pretty standard recipe for how these Clean Water Act cases usually go:

Step 1: Citizens concerned about water quality uncover major problems.
Step 2: They form a coalition of other concerned groups and lawyers and file a 60-day notice of intent to sue (as required by law).
Step 3: Wait around for 57 to 59 days.
Step 4: On the last day of the 60 day waiting period the state agency, that has a very cozy relationship with the industry it is supposed to regulate, will come in and file a sweetheart deal with the polluter and blocks the citizens from being able to file suit.
Step 5: Citizens are then left to either try to intervene or challenge the weak settlement, but they are left with many legal hurtles and polluted water.

In North Carolina, the Department of Environment and Natural Resources blocked several citizen suits aimed at forcing Duke Energy to clean up their coal ash ponds, which have been leaching pollution into the state’s rivers and groundwater. Instead, DENR and Duke formed a settlement that came with a fine of just $99,000, and the requirement they assess pollution from their ash ponds, but nothing more. However, increased scrutiny as a result of the Dan River coal ash spill has put this settlement on hold. We can only hope that a better settlement will come out of this now. 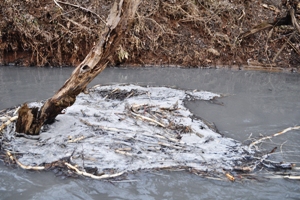 In Kentucky, Appalachian Voices and our partners (KFTC, Kentucky Riverkeeper and Waterkeeper Alliance represented by Mary Cromer from Appalachian Citizens’ Law Center and Lauren Waterworth) have challenged the way in which this most recent settlement with Frasure Creek was reached.

The Kentucky Energy and Environment Cabinet filed a case in their own administrative court to block our suit against Frasure Creek. We were made full parties to that case but Frasure Creek and the Cabinet entered a weak settlement without our agreement anyway. Basically, we are arguing that excluding us violates due process rights and the settlement is invalid because you can’t have a valid settlement without the agreement of all the parties.

One of the main excuses the cabinet gave for cutting such a nice deal for Frasure Creek was their supposed financial problems, but they completely ignored the fact that Frasure Creek is owned by Essar Group, a giant, multi-billion dollar company, owned by a family of billionaires. Frasure Creek entered bankruptcy, but it was recently bailed out with $150 million from Essar.

This is the second of two outstanding cases we have in Franklin Circuit Court against Frasure Creek. The first began in 2011 and challenges a settlement that was based on false water monitoring data that we uncovered. After that case began, Frasure Creek started using a reputable lab and submitting more accurate water monitoring reports. Those new reports showed lots of water pollution violations, and those are the basis for the case that was at issue yesterday.

At the hearing yesterday, the judge asked a lot of good questions, and we are hopeful that he will do what is right for the water and people of Kentucky.

In all these cases it seems like the key to getting state agencies to do their job is attention from the press and scrutiny from the public. When it comes to corruption, it’s often said sunlight is the best disinfectant.