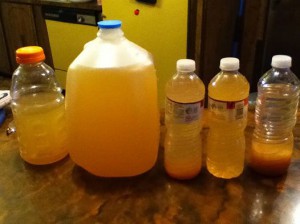 I tried to take a Jan. 28 sample of the water from my dad’s West Virginia American Water tap — the gallon jug above — into the state capitol to show our politicians the water we are forced to live with. Security told me I could not bring it in, and if I did I would be arrested. One security guard grabbed my arm and pulled me outside. They said it was an “unidentified substance.” That’s right folks, my father’s water is an “unidentified substance” now. If it’s not safe to bring into the precious gold dome of the capitol then why the hell is it coming out of our tap! 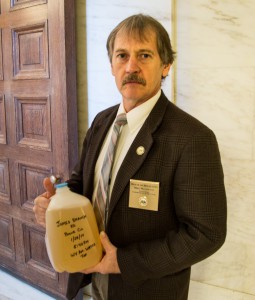 State Delegate Mike Manypenny (D-Taylor Co.) holds a jug of contaminated water he received from Dustin White. Manypenny accepted the jug and said he will have it analyzed. Photo by Paul Corbit Brown

I really think it’s unfair that a retired coal miner and Vietnam veteran who served his country cannot even have clean water right now. At least water is safer where he is right now — in a hospital outside the affected area.

Dustin White is an organizer with the Ohio Valley Environmental Coalition and a resident of Charleston, W.Va. This water was collected in Boone County, where he is helping to care for his ill father.