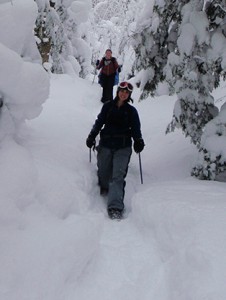 When fresh snow muffles the sounds of scurrying squirrels and creaking twigs, the winter woods offer a serenity that’s different from the rustling, lively forests of spring, summer and fall. But the deep snow that can make a frosty trail so bewitching can also creep over the tops of otherwise sturdy boots, sending even a dedicated hiker in search of snowshoes.

Paulita Cousin was one such convert. As the naturalist and park activities coordinator at West Virginia’s Blackwater Falls State Park, Cousin had long preferred to explore the Tucker County park by hiking. When she tried to lead a group outing in three feet of snow, however, each step was a challenge. After a brief struggle the crew turned around and borrowed snowshoes from the park’s rental facility, and the rest of the day went smoothly.

Since that day in 2009, whenever the snow reaches the tops of Cousin’s ankle-high boots, she straps on a pair of lightweight aluminum snowshoes.

Generally, snow should be at least four to five inches deep for snowshoeing, though that can vary depending on a particular trail’s rocks and roots. The versatile sport has a mellow learning curve that makes it an accessible hobby for people of all ages and abilities, Cousin says. She recalls a gentleman who first tried the pastime in his late 90s — he loved it, and came back for repeat visits.

For a nature enthusiast like Cousin, the winter offers a window into the lives of more reclusive wildlife such as bobcats, gray and red foxes, coyotes and black bears. Tracks in the snow reveal where these animals were leaping, running and walking. “It’s fun, I get easily distracted by following their path just to see where they went and what they’re doing,” Cousin says.

These tracks can also uncover the presence of elusive snowshoe hares, nocturnal animals that have a white coat in winter and brownish-red fur in other seasons. Their big feet help them stay aloft in the snow in the same way that a snowshoe distributes a person’s weight across the snow’s surface.

According to Cousin, an old cabin near Blackwater Falls State Park’s Lindy Point overlook offers quiet, lucky visitors a chance to spot the reclusive snowshoe hare. Lindy Point is also one of the best trails in the park for beginning snowshoers and cross-country skiers. During the winter, a forest service road that connects the park’s sledding area to the Lindy Point Trail is unplowed and provides a fairly level, three-mile excursion to one of the park’s signature viewpoints. The woods along this route feature rhododendron and mountain laurel, which keep their green leaves in winter, and also include maple and cherry trees and evergreens like red spruce and hemlock.

For outdoor enthusiasts looking for a slightly more demanding route, Cousin recommends visiting the other end of the park and taking the two-mile trek from the Dobbin House Trail to Pase Point, which boasts a couple of short but steep inclines and more rugged terrain. 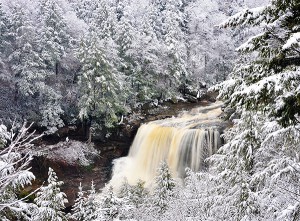 The state park also connects to a host of trails in the Monongahela National Forest. Particularly bold adventurers can even take the eight-mile Davis Trail from the Blackwater Falls petting zoo all the way to Canaan Valley State Resort Park, which has its own snowshoeing and cross-country skiing trails in addition to a downhill ski area.

Rob Gilligan, superintendent of four West Virginia state parks including Blackwater Falls and Canaan Valley, advises snowshoers to wear layers, bring a snack and water, and travel in pairs for added safety. He suggests that resort guests let hotel staff know their expected return time, and says that since all trails are marked with reflective blazes, late afternoon explorers should bring a headlamp or cell phone so they can see the blazes if needed. Most importantly, snowshoers should go at their own pace. “There’s no hurry or stress involved,” he says. “It’s all about enjoyment.”