Handing Off and Holding On: Melungeon Identity and Appalachia

Attempting to trace the origin of the Melungeon people is akin to pursuing the source of the Cumberland River coursing through their historical territory. Like the waters of the Cumberland Gap, where neighboring streams weave through Tennessee, Kentucky and Virginia to meet among the rolling crests of the Appalachian Mountains, the Melungeons — a mixed-race population of Appalachia — are the product of a great fusion. Yet where had these waters passed before they arrived in Appalachia? 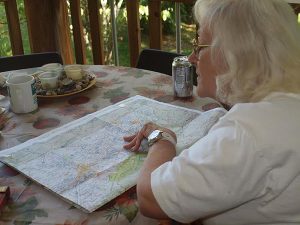 With a map of the Cumberland Gap spread on the table, Sylvia Ray, mother of Tammy Stachowicz, researches the residences of her Melungeon ancestors.

If the water had traveled along the same path as the Melungeons, some might speculate that it had pooled into swimming holes for the lost colonists of Roanoke Island, off the coast of North Carolina. Others may suggest these were the same waters that had carried the notorious ships of 17th century Portuguese slave traders across the Atlantic Ocean. While any of these stories may be true, each one blunders over an essential truth: the Melungeons— like the river — are an indisputable presence that is greater than any far-flung origin.

“You can’t pin down a definite definition for Melungeons,” says Tucker Davis, a freelance journalist and self-identified Melungeon from Buchanan County, Va. He recalls a youth spent exploring his rural mountain community of Grundy, where everyone had a different story about what it was to be Melungeon. From neighbors recounting tales of African or Native American lineage, to a Sunday school teacher who said they could be identified by a small knot of bone on the back of their heads, no one could say who the Melungeons were with certainty.

A popular misconception is that Melungeons can be identified by their dark skin and piercing blue or green eyes. This may have been true historically but, by its very nature, a racially mixed group will manifest in countless expressions over time.

The quest to conclusively characterize Melungeons may be spurred by the abiding mystery of whether they were in Appalachia even before the English. William Isom, a coordinator for the grassroots Community Media Organizing Project, explains that his family had long passed down an oral history of their Melungeon heritage; yet he was the first to conduct more extensive academic and genealogical research on his family’s deep-rooted history in the Cumberland Gap region of Tennessee.

“I’ve always been really intrigued with genealogy and keeping records even as a kid,” Isom states. “So I’ve always been interested in copies of the family tree and family photos. It’s a personality thing; I’m that guy who likes to archive things and keep these scraps together.”

From sifting through these pieces of the past, Isom says he’s settled on the idea that Melungeons are ambiguous because the population is historically mixed. In vivid detail, he speaks of how the English first scaled the Appalachian mountains in the 17th century and encountered people of color — neither Native American nor black — who dressed like Europeans, lived in houses, and spoke some kind of English, which they used to announce that they were Portuguese.

But this history still would not provide a decisive answer of origin: the Portuguese were the first slave traders, and their population included Jews, Muslims and North Africans. What is known with more certainty is that the term Melungeon did not appear in print until 1813, where it was used to ascribe mixed-race identity to others.

Tucker Davis has documents from this early time period of his own ancestors appearing in court, fighting the theft of their land after having been labeled Melungeon. According to Isom, discrimination and the resentful sentiment of being labeled a Melungeon can still be very tangible in northeast Tennessee.

Recalling folklore that would brand Melungeons as bogeymen, Isom says that children would be warned, “Don’t go out in the woods at night, the Melungeons will get you.” In his community, it was not uncommon for fights to ensue if the word was thrown around.

“If you called someone Melungeon, it meant you hated that person to the core of their being,” Isom says. “But now it’s fine,” he adds, because “most of the Melungeon population has assimilated into broader society, so the threat — the dread — of getting your property taken, or being murdered is no longer a reality.”

Growing acceptance of Melungeon identity is the most recent emergence in this complex narrative. “I knew no one that referred to themselves as Melungeon prior to 1990 because until recently in some areas it’s still a term you don’t say out loud — it’s a racial epithet,” states Isom, who himself became engaged with the grassroots Melungeon movement in the mid-’90s. 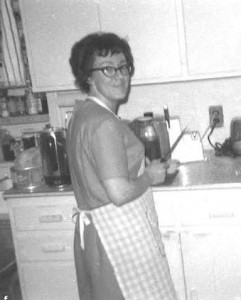 Ray is preparing a meal in this 1968 photograph. Many recipes were passed down by her Cherokee grandmother in southeastern Kentucky. Photos courtesy of Tammy Stachowicz

Isom asserts that there are actually two kinds of Melungeons: racial Melungeons and cultural Melungeons. While a racial Melungeon is someone from a historically mixed community, Isom explains, a cultural Melungeon is “poor folks — who make up the bulk of people in Appalachia — who might not have racial disparities to deal with, but share a cultural and economic identity. They understand that even though they might be white and from the mountains, they’re still not quite white enough, they’re not quite assimilated into the mainstream, they’re not marketable.”

The idea of racial status forming the basis of identity is a persistent — and harmful — belief. “Race itself is so socially constructed,” remarks Tammy Stachowicz, a diversity instructor at Davenport University in Michigan. For Stachowicz, her experience as a Melungeon had nothing to do with her skin tone.

Stachowicz discovered her Melungeon origins while searching for the source of her family’s puzzling heritage. She grew up on a farm in Michigan, where her family carefully tended their garden and orchard and raised animals including horses, goats, pigs and chickens. Although she recalls these memories fondly, Stachowicz felt throughout her childhood that there was something about her family that was different.

“Nobody else was so self-reliant — canning, freezing and growing their own food,” she says. Other children in the neighborhood made sure that she knew just how unusual this seemed. “We got teased mercilessly. Kids behind us on the school bus would throw spit wads and make animal noises,” Stachowicz adds. In her journey to understand her identity, she conducted her thesis work on Melungeons and came to a versatile conclusion: “Nature doesn’t make you Melungeon. Nurture does.”

Yet despite this conviction — one which she found validated by various Melungeons she spoke with — many people have never stopped trying to pinpoint a firmer genetic source of Melungeons. With the advances of modern technology, this fascination has taken on a new form.

Most recently, researchers published a Melungeon DNA study in the Journal of Genetic Genealogy. The final results examined only a “core group” of Melungeons — one that excluded many self-identified families — and concluded that Melungeons are primarily sub-Saharan African and European. Tucker Davis is unconvinced. “Even if a group of researchers vote on some technical definition of Melungeons, it won’t matter,” he says. “It won’t change what it means to be Melungeon.” 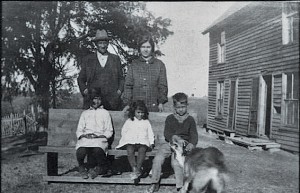 William Isom found this undated photograph of his great-great-aunt and uncle, Lillian Isom and Henry Cloud, while searching for information about his family’s heritage in northeastern Tennessee. Photo courtesy of William Isom

In a nod to the damaging effects of assigning an identity to others based on race, the American Anthropological Association wrote in 1999 that “humans are not unambiguous or clearly demarcated … race is an arbitrary and subjective means of classifying groups of people, used to justify inequalities … and the myths impede understanding of cultural behavior.”

This plight is poignantly revealed in Appalachia, which has long struggled to shed stereotypes imposed by others. For Melungeons, this struggle is magnified. Despite sharing the Appalachian cultural heritage — a story of independence and a fighting spirit shadowed by mistrust from generations of exploitation — Melungeons have suffered harsh discrimination from their “whiter” neighbors.

Prejudice against Melungeons has waxed and waned over time, in step with shifting racial perceptions in the United States. Through the emergence of racial slavery in the late 17th century, wealthy landowners sought to keep the poor under control by pitting racial groups against one another. Despite the shared heritage of many Appalachians, the stigma that came to be associated with race led much of the public to speak of “purity.” Those who could not conceal a multi-racial background encountered countless civil, educational and economic limitations.

Yet prior to — and even following — the rise of racial slavery and legal segregation, people of all different backgrounds were sharing cultures and marriages, adding to the identity of Melungeons today. As Davis explains, the story of Melungeons is not just one of discrimination, but also of diversity and community. “When I think of Melungeons, I think of unity,” he states.

In revealing the legacy of Melungeons, Isom says that he wants to “dispel the myth of Appalachian whiteness and dispel the cut-and-dry story of American settlement in Appalachia: that there was Cherokee, then the Scotch-Irish came, then the TVA, and mountaintop removal — that’s Appalachia.” He adds, “I want to mess that up as much as I can.”

Exactly where Melungeon identity ends and Appalachian identity begins is uncertain. Davis suggests that maybe being Melungeon is just a state of mind. Stachowicz likens it to a venn diagram, pointing out that with generations of Appalachians and Melungeons all living together, “you can’t know one without the other.” Then again, maybe it’s not so surprising that there is no single element that can define the shared experience of identity.