Out of Frame: Regional Stereotypes in Photography 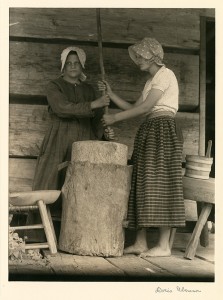 Earlier this year, a photo essay published by Vice Magazine titled “Two Days in Appalachia” provoked controversy over the portrayal of the region in the media. The images were made in the photographer Bruce Gilden’s signature style, using a harsh flash and zooming in on his subject to an almost-uncomfortable and unflattering degree. The piece solicited a strong online debate, with some commenters objecting that the photographs perpetuated a derogatory stereotype and narrow view of the region, and others defending the artistic merits of the work. To understand why Gilden’s photographs caused such an outcry from some people living in the region, it is important to have an understanding of the history of Appalachian imagery.

The late 19th century and early 20th century saw the re-discovery of culture and resources in the Appalachian Mountains by the rest of the country. Missionaries, industrialists, scholars, writers, photographers and the like perceived these wild and untouched mountains as America’s last frontier, to be used for the coal beneath the ground and the lumber on its hillsides, or a chance to preserve the last remnant of “Pioneer America.”

Child-labor advocate Thomas Robinson Dawley selected photographs of families in western North Carolina and East Tennessee in his 1912 unofficial government-report-turned-book, The Child that Toileth Not, to highlight the ignorance, lawlessness and immorality of the mountain people as a justification for industrialization. Northern missionaries and educators flooded into Appalachia, determined to preserve and enhance the lifestyle of the hard-working, hand-hewn and independent mountain people who still spoke in Elizabethan tongue.

Simultaneously, colorful stories appeared in the well-established Atlantic Monthly magazine that characterized the people in Appalachia as uneducated moonshiners and hillbillies, designed to entertain urban readers.

This era of re-discovery resulted in two polarizing and anglo-centric stereotypes that have continued to represent Appalachia: that of the wizened but simple mountaineer on the verge of extinction, and his brother, the poor, ignorant and sometimes dangerous hillbilly.

Bayard Wootten’s photographs for Muriel Early Sheppard’s 1935 book, Cabins in the Laurel, present the Appalachian people as ignorant and unindustrialized. Wootten’s portraits and Sheppard’s writing omit any evidence that industrialization or broader American culture had ever reached Southern Appalachia, when in fact the railroads had been running lines through the region since the 1850s. Appalachian State University history professor Ralph E. Lentz wrote that while Cabins in the Laurel was well-received by critics outside of western North Carolina, the subjects of the book were less than pleased to be presented as “backward, illiterate, drunken hicks.”

On the other end of the spectrum, Appalachian photography is also commonly associated with the image of the dignified and wise but simple mountaineer, who is the last of his kind. Photographer Doris Ulmann’s beautiful and nostalgic portraits for the 1937 book Handicrafts of the Southern Highlands echo this sentiment. When Ulmann arrived in western North Carolina in 1932, she would ask her subjects to change out of their normal clothes and into their old-time linsey-woolsey clothing to look the part of the “Appalachian mountaineer.”

It is worth noting that with the arrival of the railroad came the Sears Roebuck & Co. Catalogue; so even though people in the mountains were unable to afford all the amenities of modern life, many were aware of and able to follow the fashion of the day. But in Ulmann’s images of the Appalachian people, bonneted and barefoot women spin wool and churn butter and old men wield handmade tools.

“Ulmann consciously sought those people who fit the Appalachian stereotype because she believed they were a disappearing species in modern, 20th century America,” Lentz writes.

The photographer’s desire to collect and preserve the traditional Appalachian mountaineer, while well-intentioned, produced a popular assumption that to be considered Appalachian you had to be isolated and of Scotch-Irish or English descent. Even the magnificent landscape photographs made by George Masa to advocate for the creation of the Great Smoky Mountains National Park during the 1920s tell the story of a geography so remote there was nary a sign of human life in the mountains. In reality, hundreds of people were displaced from their homes in order to build the national park.

These narratives depict Appalachia, for better and for worse, as an isolated land of poverty, backwardness, fierce religiosity and tradition. This singular view became the standard for representation of the region in the canon of popular culture. While the images are certainly rooted in elements of truth, they often fail to represent residents of Appalachia as people from differing racial, ethnic, and economic backgrounds with a full spectrum of emotions and experiences.

Additionally, photographs that continue to just show one view of the region, like the ones that appeared in “Two Days in Appalachia” piece, suggest the culture in Appalachia does not differ from hill to holler to city. This kind of homogenization of an entire region establishes a rigid set of criteria for what it looks like to be Appalachian, denying many people their sense of belonging to the area. As Affrilachian poet and social media activist Crystal Good implored on her Facebook page in response to the photo essay, “Ain’t I Appalachian too?”

There have been photographers both before and since the discovery of Appalachia who have made meaningful, authentic work that represents the complexities of the region. These photographs, until recently, lacked the sensationalism to make it into the media.

The advent of social media has provided an opportunity to look at Appalachia through a wide-angle lens. Increased access to the internet and websites like Instagram and Facebook have broadened the diversity of images and stories coming from the region.

Contemporary movements include the “Affrilachian Artists Project,” which aims to build community among artists of color living in and inspired by the mountains, the Stay Together Appalachian Youth Project’s Appalachian Love Story campaign which encourages individuals to share their own photographs and stories using the hashtag #appalachianlovestory, or the “Looking at Appalachia Fifty Years After the War on Poverty” project created by Roger May. All around Appalachia there are photographers engaged in a dialogue to change and expand perception of the region, allowing folks to declare ‘hey, I’m Appalachian too.’

Lou Murrey is a photographer from western North Carolina. Her work has appeared in The Sun Magazine, the North Carolina Folklore Journal, and the Looking at Appalachia Project. She was the photographer and co-creator of The Blue Ridge Farm Book with Blue Ridge Women and Agriculture. Lou Murrey’s work can be found at www.loumurrey.com and on instagram at lnmurrey.