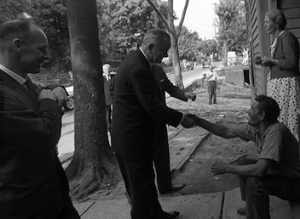 Fifty years ago today, President Lyndon Johnson declared a war on poverty from the front porch of a home in Martin County, Ky. Photo from Wikimedia Commons.

On this day 50 years ago, President Lyndon Johnson looked out from the front porch of a weary-looking eastern Kentucky home and declared war on poverty.

At the time, one in three Appalachians were considered poor. The poverty rate in the region is now closer to the national average — 16.1 percent in Appalachia compared to 14.3 percent nationally — but, as you might suspect, those statistics tell only part of the story. Economic disparities between Appalachian counties and sub-regions remain high, and, as it was in 1964, eastern Kentucky remains a focal point.

Today President Obama announced that eight counties in southeastern Kentucky would comprise one of five new “Promise Zones.” This designation doesn’t provide new funding, but it grants those counties higher priority for existing federal funds, and federal assistance in accessing those opportunities. The announcement also coincides with a push toward collaboration and economic diversification in eastern Kentucky.

In these counties, as in much of Central Appalachia, the road out of poverty has been troubled by the region’s complicated relationship with coal. As Brian Sewell wrote in a 2013 issue of The Appalachian Voice, “The mixed results of economic initiatives in Appalachia are not for a lack of will. During the 20th century, social and labor movements repeatedly rose in opposition to unjust land leases, anti-union policy, insufficient medical care for miners with black lung disease and the destruction of mountaintop removal. Each time, there were powerful forces pushing back.” Read his analysis on why poverty is such a persistent challenge in Appalachia here.

In the next issue of The Appalachian Voice, we’ll look closer at the War on Poverty, exploring its goals and outcomes and examining what the lessons from the past 50 years can tell us about the way forward.

Independent journalist Ralph Davis, who is among the 27 visionaries featured in the current issue of the publication, created this excellent infographic about the impacts of the War on Poverty in Central Appalachia. Do these numbers reflect your experience? Tell us in the comments.

The War on Poverty in Appalachia, 1964-2013 | Create infographics
About