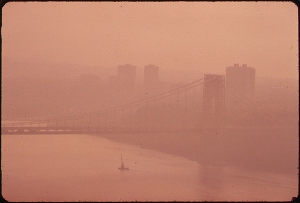 Although the Clean Air Act was first enacted Dec. 17, 1963, it wasn’t until the 1970 Clean Air Act amendments that the law was substantial enough to make a memorable mark on history. Perhaps embarrassed by memories of the more clumsy and inept act of 1963, the U.S. Environmental Protection Agency itself gave the 50th anniversary the cold shoulder — instead celebrating the 40th anniversary of the amendments Dec. 31, 2010.

Yet despite the shortcomings of the original Clean Air Act, it marked the first time that the federal government seriously acknowledged the grave need to fund air pollution control mechanisms. In addition to being the era of free love, the 1960s were also a time when uncontrolled emissions from industrial facilities blanketed the nation in noxious air pollution. Aside from chronic health effects such as asthma and emphysema that resulted from this exposure, temperature inversions — the weather phenomenon that results in fog — would cause a killer smog to descend on many of the nation’s cities. The death toll could reach to over 100 during these incidences.

The problem with the Clean Air Act of 1963 was that it called on states to take primary responsibility for regulating air pollution. Every state declined to take this suggestion seriously and the deadly smogs continued. It wasn’t until Richard Nixon — a Republican whose actions showed that environmental protection need not be political — signed the Clean Air Act amendments of 1970 that enforceable standards were established on a national scale.

According to the EPA, the years since 1970 have seen a 50 percent reduction in the six most commonly found air pollutants, and an end to the production of most ozone-depleting chemicals — all while the U.S. gross domestic product has tripled and energy consumption has grown by more than 50 percent.

In two currently ongoing court cases regarding the Clean Air Act, it seems likely that the positive ramifications of monitoring air pollution will continue to accumulate. One case concerns the Cross-State Air Pollution Rule, which seeks to limit power plant emissions contributing to pollution in downwind states. Although the proposal was struck down by a lower court in 2012, the EPA appealed and received a better reception in the Supreme Court this past Tuesday. A final decision will be issued by late June, and publications ranging from the New York Times to the Washington Post have reported that the Supreme Court appears inclined to rule in favor of the EPA.

The other case focuses on utility group challenges to greenhouse gas regulation. This past October, the Supreme Court limited the scope of their forthcoming February review to whether the EPA has the authority to regulate stationary sources that emit GHGs as a sole pollutant. The review has already been hailed as a victory by some environmental groups since a previous ruling that GHGs are pollutants was allowed to stand. Due to complex technicalities in Clean Air Act regulatory programs, this means that even if the court rules that the EPA can’t regulate stationary GHG emissions alone, they can still regulate GHGs from large facilities that also emit traditional pollutants (and most do).

From humble and ineffective beginnings, the Clean Air Act has a proven record of protecting our communities. Every step along the way has brought us further from the darkened industrial cities of our past and closer to a future where the act of breathing does not endanger our health. That’s why we here at Appalachian Voices want to say thanks, and Happy 50th Anniversary!