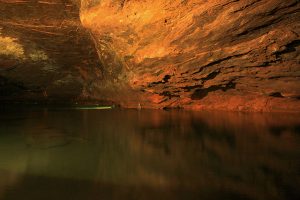 Sweetwater, Tennessee is home to the largest underground lake in America. Spanning over 4.5 acres, the Lost Sea lies hundreds of feet beneath a mountain within the Craighead Caverns cave system. Exploration has uncovered Pleistocene-era jaguar tracks, Cherokee artifacts and graffiti from Confederate soldiers who were sent underground to mine saltpeter during the Civil War. Fragile crystalline clusters known as anthodites adorn the cavern walls, a feature found in only a handful of caves worldwide. 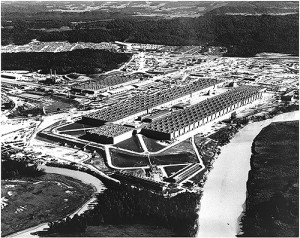 Photo by Ed Wescott (American Museum of Science and Energy)

While World War II raged in Europe, an army of workers in Tennessee were creating the weapon that would end it. In 1942, Oak Ridge was established as a Manhattan Project site, and was quickly transformed into a secret government city; the town’s pre-war population of 3,000 shot up to 75,000 by 1945. With limited knowledge of their work, these uranium plant workers helped create the world’s first atomic weapons.

Today, visitors can explore the American Museum of Science & Energy or tour the grounds aboard the Secret City Scenic Excursion Train. Oak Ridge and the surrounding area are also home to the Museum of Appalachia, the Coal Miner’s Museum and the Oak Ridge Environmental Peace Alliance headquarters. Formed in 1989, OREPA raises awareness about the environmental degradation caused by the nuclear facilities.