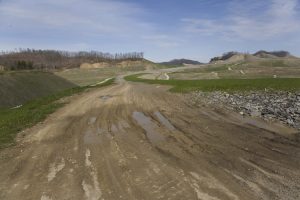 Residents fear the Coalfields Expressway highway project will benefit coal companies more than the communities it will bypass. Photo by the Virginia Department of Transportation.

To help citizens raise their concerns around the coal industry-proposed route of the Coalfields Expressway in southwest Virginia, we’re inviting residents of the commonwealth to submit letters to the editor of their local newspapers. Sign-up to submit your own letter to the editor here.

Recent headlines announcing $108 million in funding for the Coalfields Expressway suggest the project is well on its way to completion. Unfortunately, $108 million is a tiny sum compared to the total amount officials hope the Virginia and federal taxpayer will spend on this project.

The next section, currently under review by the Virginia Department of Transportation, is more than 24 miles long, routed by the coal industry for maximum extraction, and is slated to cost $2.8 billion – before cost overruns, which seem inevitable.

VDOT would like taxpayers to focus on the 45 percent savings promised on these “coal-synergy” highway projects but, perhaps, the majority of southwest Virginians would rather see 2.8 billion spent on improving the narrow pot-holed roads that take them to work and back home, which would leave plenty of money to support high-speed internet – something that is much more likely to bring prosperity to the region than an isolated highway that bypasses communities rather than directing visitors to them.

Unfortunately, the coal companies and other prospectors along the route do not seem concerned about local communities. These advocates of the highway want southwest Virginians to think they are the heroes for bringing development to the region.

In reality, a limited-access divided highway, the language VDOT uses for a four-lane highway that overpasses many rural roads, will miss economic centers by miles. Worse, the coal industry route moves the project even further away from existing towns than a route approved by VDOT in 2001, decreasing the likelihood that existing businesses will receive any benefit from the supposed increased traffic that will be drawn to the area.

The Coalfields Expressway as proposed is not a road to prosperity. Like many past broken promises, it’s a shortcut to profits for the coal companies. To counter the misleading arguments supported by VDOT, we are inviting residents of the commonwealth seeking real progress and economic development for the communities that need it the most to submit letters to the editor to their local newspapers. Submit your letter here.