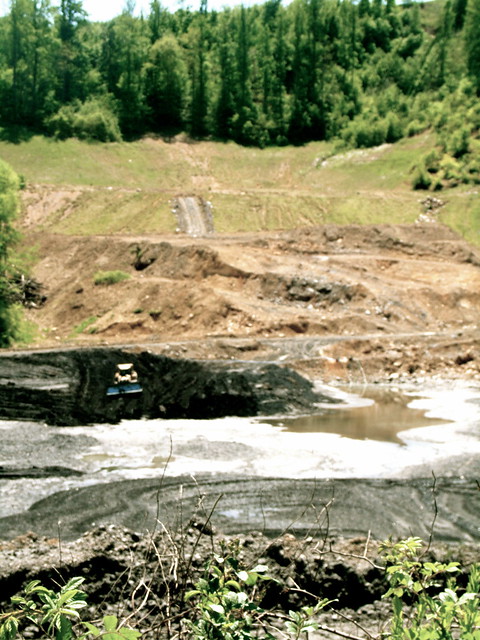 Drop us a note in the comments to say hello, let us know a bit about yourself, what you’re interested in and what stories we might be missing. It’s been a busy couple of weeks for the Volunteer State in the world of energy, TVA and Congress, so let’s get right to it.

Victories!
Believe it or not, both houses of Congress, with support from both parties, are moving on important pieces of legislation to protect our mountains, and to promote energy efficiency.

As several Appalachian Tennesseans came to Washington, D.C., the bi-partisan Clean Water Protection Act was introduced by Congressmen Frank Pallone (D-NJ) and Dave Reichert (R-WA), and already has more than 50 cosponsors from both parties and from all across the nation. The Clean Water Protection Act is a simple bill that would make it illegal for coal companies to perform the “valley fills” associated with mountaintop removal coal mining. Congressman Cooper (D-TN-05) and Congressman Cohen (D-TN-09) are both original cosponsors of the bill! You can call them using the Congressional switchboard at 202-224-3121 to say “thanks for cosponsoring the Clean Water Protection Act, and for protecting our mountains.” 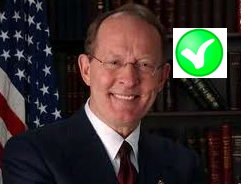 We had a fantastic victory in the U.S. Senate, where the Senate Energy Committee passed a bipartisan Energy Savings Bill (S 761) by a vote of 19-3. Senator Alexander sits on this panel and voted AYE, and you can call his office at 202-224-4944 to say “thanks for supporting S 761 and promoting energy efficiency for our country.” This bill, introduced by Senators Shaheen (D-NH) and Portman (R-OH), would save energy by improving building codes, while incentivizing industrial energy efficiency and promoting energy savings at federal buildings. That bill now moves on to the Senate floor while the House counterpart (HR 1616) awaits committee action.

Last week, when the U.S. Senate took up the Water Resources Development Act, we were successful in working with a broad array of groups to keep several pro-mountaintop removal amendments off of the bill. Senator Manchin (D-WV) and Senator Paul (R-KY) were the chief culprits of trying to add the bad amendments, and its very likely that they’ll try to sneak these amendments onto legislation again in the near future.

In addition, the House and Senate both passed a “Farm Bill” onto the floor of their respective chambers. The Senate version includes a great program called the “Rural Energy Savings Program” that could greatly increase energy efficiency implementation in parts of rural America served by electric cooperatives. 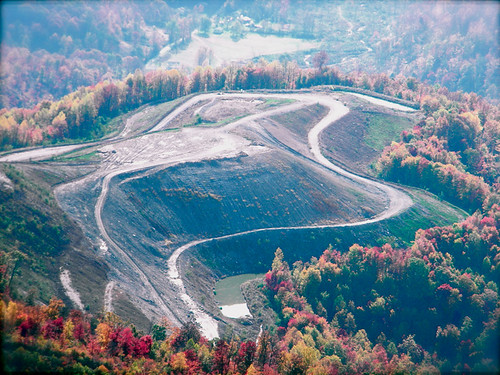 Meanwhile, several of our colleagues are filing suit over mountaintop removal in Tennessee, claiming that the U.S. Fish and Wildlife Service (among others) failed to consider how mining pollution would impact local species. It is being reported that FWS is taking the claims very seriously. Stephanie Matheny of TCWN (one of the plaintiffs) says:

“Strip mining in Tennessee has polluted our waters to the point that native fish like blackside dace and Cumberland darters are barely holding on. If the water is too dirty for the fish, it can’t be good for people either.”

We agree Stephanie. Keep up the great work! The suit seeks to overturn mining permits, including Zeb Mountain (pictured), to send them back to federal officials for review.

A fantastic report on the need for economic diversification and the market influences on the decline of Central Appalachian Coal was released by Downstream Strategies. Download the whole thing here. If you’re a coal nerd, its a must-read.

TVA-land
On to the world of TVA, which has been taking up a lot of ink lately for numerous reasons, some good, some bad, and some purely political.

To highlight the changing market for coal, TVA is trying to give incentives for thousands of its employees to retire.

“For environmental and economic reasons, we are making some strategic decisions about idling or retiring some of our coal units. As we proceed with these idlings across our coal fleet, there are going to be reductions in the number of positions needed.”

One of the simplest things they could do, from our perspective, is to take the $1 billion they were going to invest in the Gallatin coal plant and move those funds towards investments in energy efficiency. Rather than prolonging the life of an old, dirty coal plant, TVA can create jobs, cut coal demand, and save ratepayers millions of dollars in the long run. Here’s the news version and here is the nerd version of that story. 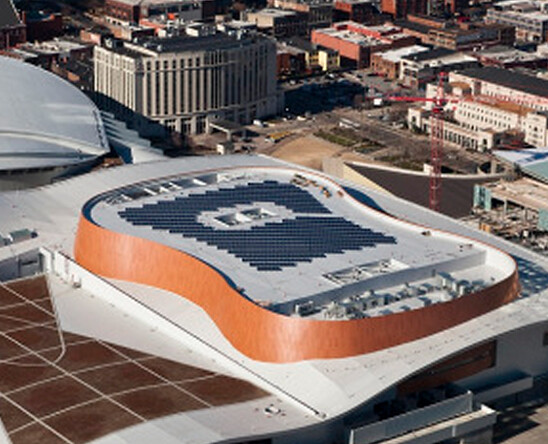 In the realm of clean energy, TVA has rightly been applauded for recently putting more than 250 small-scale solar projects online, representing 7.5 megawatts of clean, green electricity. However, they have also been accused of mismanagement, as the Green Power Provider program hit their cap by April 24, meaning no more solar investment this year, despite the incredible demand. Lightwave Solar, a local solar provider strongly criticized the management of the program, right after they installed a 211kW solar system for the Music City Center – the largest solar installation in Nashville. [pictured here]

TVA has also been promoting the industrial energy rebates enjoyed by the likes of Bridgestone and Federal-Mogul, who just recieved a huge energy efficiency rebate of more than $200k from TVA. The energy savings implemented by Federal-Mogul are expected to save them an additional $175k+ every year.

And of course, there has been some talk about the “ selling off” of TVA that was proposed in President Obama’s budget. This move is widely seen as bad for the region, and is opposed by everyone from electric co-ops to bass fishermen. My favorite write-up, here, was from our friend Sue Sturgis at FacingSouth.

One of the most disturbing bits of news is that TWRA, for what we believe is the first time, is looking to lease our protected and publicly owned land for coal and gas extraction. NewsChannel5.com | Nashville News, Weather

Even more disturbing was the proximity of the lobbyists pushing the idea to Governor Bill Haslam, who comes from an oil and gas family. Tom Ingram, a lobbyist for Crossville Coal, also ran Governor Haslam’s gubenatorial campaign has been in some hot water over his involvement.

Image of the Day 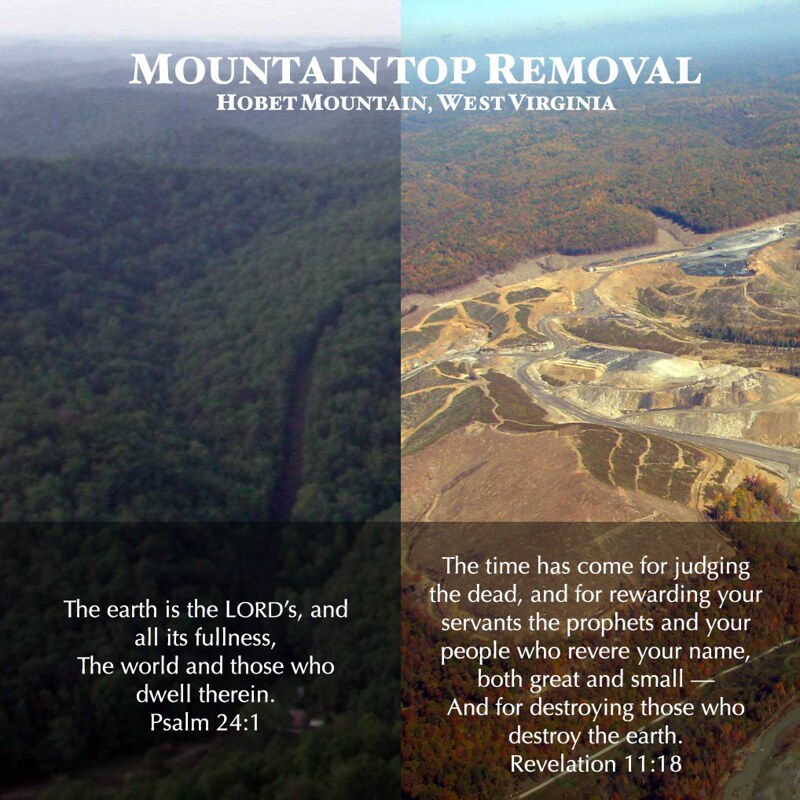 Chart of the Day
From the Downstream Strategies CAPP coal report, this image shows both the declining demand for CAPP coal, and highlights what a small role Tennessee plays in our regional coal production. We shouldn’t be blowing up Tennessee’s mountains for any amount of coal, let alone the trickle we are currently producing. 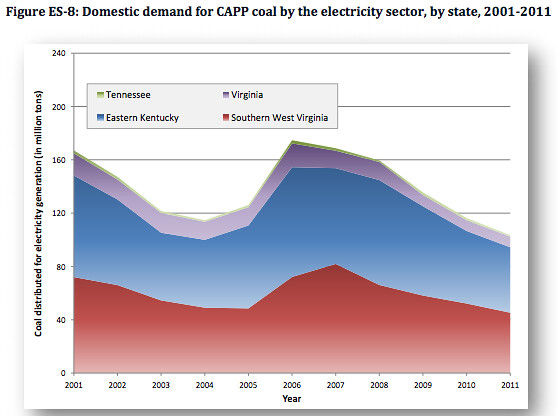 Table of the Day
Again from Downstream Strategies new CAPP coal report, demand for coal from Tennessee (and across Appalachia) is way, way, way down.

I’ve never been the biggest fan of the Grateful Dead, but after three trips over to Campbell County in two weeks, I’m getting pretty familiar with the Cumberland Blues.

Thanks, and have a great Tuesday! Don’t forget to introduce yourself in the comments, and let us know what you’re seeing out there.