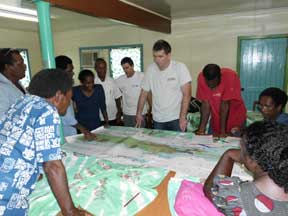 Half a million people live on the hundreds of specks in the wide-open Pacific that form the Solomon Islands. Most live simply, subsisting as small-plot farmers and fishermen. Land is owned collectively by villages and tribes. The economy is tiny, the natural resources vast.

Eight thousand miles away in the mountains of southwest Virginia, Brad Kreps directs the Clinch Valley program of The Nature Conservancy, an international conservation group. Here, the conservancy’s work involves restoring abandoned mine lands harmed by decades of unregulated coal mining. The damage is significant; many sites will require long-term, extensive cleanup.

There’s no such legacy to heal from in the Solomon Islands, which have seen almost no mining. But a Japanese company, Sumitomo, is poised to change that. They’ve explored the mineral resources on Isabel, the Solomons’ third-largest island, and found nickel. Now, they want to dig.

Locals, including the staff of The Nature Conservancy’s Solomon Islands program, see a critical need to move forward mindfully. The central government agrees. Previous efforts to develop the economy through commercial logging have been a sobering lesson, with forests heavily cut and little revenue reaching the people. Nobody wants to make the same mistake with nickel.

But the conservancy staff in the Solomons has little experience with mining. They’re marine experts, working for decades now to protect some of the planet’s most diverse and threatened coral reefs. So they sought help through a global fellowship that sends U.S.-based Nature Conservancy staff to provide short-term support abroad.

That fellowship tapped Kreps and his colleague, Braven Beaty, to leave Appalachia and spend a month last winter with the Solomon Islands team, culminating in a three-day Community Conservation Workshop on Isabel Island. There, Kreps says, “we worked to map out the at-risk natural and cultural resources on the island.” The Nature Conservancy’s Solomon team and other environmental groups detailed ecological features. Sumitomo outlined the specific areas they hope to mine. Tribal and community leaders described their use of the land, including fisheries, sacred sites and fresh water sources. And Kreps brought the lessons of the Clinch Valley — such as strategies to protect water sources by reducing acid mine drainage — to help guide the conversation.

That conversation has been fruitful. Local Nature Conservancy staff have become more knowledgeable about mining, and Sumitomo has agreed to deem certain locations off-limits. Most critically, insight from the workshop is now helping the government determine how, exactly, to manage mining if it proceeds. “It’s kind of a watershed moment,” Kreps says: an opportunity to draft industry-specific laws in advance of the industry. In other words, it won’t be another Appalachia. “You won’t have 70-plus years of unregulated mining before passing laws.”

The Nature Conservancy plays a supportive role, not a prescriptive one. “We’re not going to tell them what to do,” Kreps says. “We just want to help them have all the information available to make informed decisions.” That foreknowledge, he says, could make all the difference for a developing nation eager to avoid the pitfalls of unregulated mining.

More than just geographic distance separates this Pacific island from the eastern United States. Other factors, such as mineral ownership policies, differ as well. In Appalachia, private citizens hold the rights to minerals beneath their land.
But in the Solomon Islands, the government owns all the nickel, no matter who owns the land. In this way, the economics resemble those in the South American nation of Colombia, where minerals are also government-owned but privately extracted.

Policymaking in Colombia, though, hasn’t been quite so painstaking or attentive to locals, say members of Witness for Peace and Kentuckians for the Commonwealth. The two non-profits have forged an ongoing knowledge-sharing partnership between coal-mining regions of Kentucky and Colombia, and annual delegations have allowed residents of each region to visit one another.

As part of a 2009 delegation to Colombia, Kentucky native Miranda Brown saw villages so disturbed by reckless mining practices that residents were ready to simply abandon their homes. Mines had damaged farmland and water sources, bringing nothing but hardship. Companies claimed to provide jobs but hired no locals.

Strategically speaking, that might be an asset, Brown says. “Everyone’s in the same boat as they fight for compensation to resettle. No one has a personal investment in the company.”

Back in Appalachia, solidarity can be disrupted by financial ties. “Somebody in your family, or your neighbor, is employed [by the mining company], so it’s hard to be united in fighting,” she says.

Appalachian studies pioneer Helen Matthews Lewis vividly remembers one particular fight between Virginia coal miners and their employers. Hosting a community forum about the coal industry in the 1960s, Lewis was stunned when nearly 500 disabled miners arrived, carrying their chest x-rays in their back pockets. The miners had black lung disease, and came to spread the word as they demanded compensation.

A few years later, Lewis traveled to Wales to study life in mining communities there. She and her colleagues found black lung to be scarce and conditions to be safer overall. Lewis attributes the difference to economics; in the 1970s, the British government didn’t just own Welsh coal, it owned the entire industry, and invested early on in safety equipment such as sprayers to keep dust out of the air — and out of miners’ lungs. When Welsh miners traveled to Appalachia during a later phase of of Lewis’s research, “they were horrified at conditions here,” she says.

Again, says Lewis, the problem is a large-scale economic one.

“When a company essentially owns the community, they can get away with tearing it up,” she says.

Preserving and sustainably using land in the face of ambitious industry is a global struggle, perhaps an inevitable one in regions striving to compete economically. Brad Kreps sees that reality in the Solomon Islands. The Nature Conservancy is aware that while residents of the islands value their traditional lifestyles, they also hope to modernize their economy in order to improve health care and increase access to electricity, gas-powered boats and better roads.

“But we also recognize that while a mining sector could bring economic growth and some of those opportunities, it could also happen in a way that doesn’t benefit local people very much, and possibly cause enormous social and environmental problems,” Kreps adds. “We want to help people consider the importance of environmental protection, of course. But our biggest focus is to bring our experience to support a good decision-making process.”

Kreps will be watching an industrializing Isabel from Virginia, hoping that process will help pave the way toward a mindful, sustainable future.