“After Coal,” Beyond the Big Screen 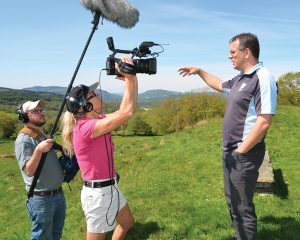 Appalachia has long been misrepresented in media. As a result, many filmmakers working in the region have made a push to ensure accurate portrayals of community members. One way the filmmakers are doing this is by including the input and feedback of documentary participants.

In “Hollow,” a 2013 Peabody award winning interactive documentary, Elaine McMillion Sheldon documents the realities of life in McDowell County, W.Va., by placing cameras into the hands of residents. The method she used allows local people to play an active role in the storytelling.

The documentary “After Coal” is another example of a participatory documentary project. “After Coal” filmmaker Tom Hansell profiled inspiring individuals who are building a new future in the coalfields of central Appalachia and south Wales in the United Kingdom, two regions developed around the extraction of coal. Between 1980 and 1990, Wales lost 20,000 coal jobs, and central Appalachia lost an identical number of coal jobs between 1994 and 2014. “After Coal” shares stories between residents of Appalachia and Wales, building collective wisdom about how to survive dramatic job loss and supporting a just economic transition in the coalfields. 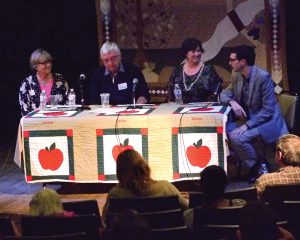 A panel discusses strategies for regenerating coalfield communities in Appalachia and Wales at a 2014 community forum held at the Appalshop building in Whitesburg, Ky. From left to right: Mair Francis, founder of DOVE Workshop, Hywel Francis, then a member of Parliament, Robin Gabbard of the Foundation for Appalachian Kentucky, and Evan Smith of the Appalachian Citizens Law Center. Photo by Angela Wiley.

According to Hansell, participatory exchange is one way to empower communities to control their own destiny. His participatory approach to documentary filmmaking involves the input and feedback of the community members being represented. This type of filmmaking gives power to the subjects — they determine if the portrayal is accurate, and it becomes the filmmaker’s responsibility to interpret this feedback for the audience.

“My experience in Appalachia showed that when a film was perceived as offering a skewed vision of a community, then people dismiss the issues in the film,” Hansell says. “I don’t want the grassroots groups who are doing the real work of revitalizing the Appalachian region, or South Wales, to discount this film. I want ‘After Coal’ to be of use to the communities where it was filmed.”

Hansell showed rough-cut screenings in coalfield communities across both regions to encourage a discussion of issues such as cleaning up mine waste, retraining miners and developing renewable energy.

At the same time, he collaborated with community groups to support an exchange between former miners, musicians, activists and policymakers from both Appalachia and Wales. Recordings from these discussions were used for a radio series broadcast on WMMT-FM in eastern Kentucky and BBC Wales in the U.K. 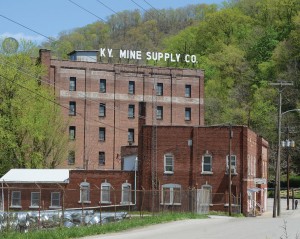 The Kentucky Mine Supply Building in downtown Harlan, Ky. Photo by Tom Hansell

Hansell learned these methods at the Appalshop media arts center, one of the region’s premier media making organizations. While living in the coalfields of eastern Kentucky, he listened to the concerns of miners about adjusting to an economy that no longer needed coal.

For Hansell, “After Coal” is an attempt to explore what keeps communities alive after their main industry has moved on. He stresses that making a documentary goes beyond simply entertaining the audience — it is about asking questions and seeking truth. And through building relationships and asking thoughtful questions, Hansell is able to assist community members in the search for varied and sustainable industry “after coal.”

“After Coal” has a 56 minute run time. The final film will be released in 2016. For more information, visit aftercoal.com