If you take one of The Nature Conservancy’s monthly hikes through Bluff Mountain Preserve in Ashe County, N.C., you’ll experience a rare mountain fen firsthand. Walking along the trail, the trees suddenly give way to a clearing closely resembling a meadow of grasses and flowers. Meadows are rarely found at 4,500 feet elevation, however, and do not typically swallow your boots in mud.

Wetlands such as bogs and fens are some of the rarest natural communities across central and southern Appalachia. Bogs are defined by their nutrient-poor, acidic and saturated soil, and are usually found in depressions or low-lying areas filled by precipitation. Mosses and shrubs thrive while mature trees are rare. 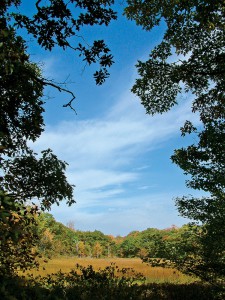 In Ashe County, N.C., the oak forests of Bluff Mountain give way to a rare mountain fen. Photographer Kim Hadley, who captured this image, began volunteering with The Nature Conservancy to help care for the area in 2004.

A fen is essentially a bog fed by groundwater. This makes them slightly less acidic, more nutrient-rich and home to a wider variety of grasses than bogs, accounting for the characteristic meadow-like look of fens.

Functionally, however, fens and bogs are nearly identical. Because of this similarity, high-elevation, isolated wetlands are often collectively referred to as “bogs.”

Although mountain bogs represent less than one percent of the southern Appalachian landscape, they are highly functional pockets of immense ecological and practical importance. Not only are the bogs biodiversity hotspots for rare and specially adapted species such as the mountain sweet pitcher plant and the Carolina northern flying squirrel, they also provide natural water-level controls for surrounding communities. Bogs act as buffers in times of both drought and flood, replenishing springs during dry spells and catching overflow during heavy rain.

This consistent water supply attracts critters such as the water shrew, a small mammal whose hairy hind feet allow it to run or glide across the water without getting stuck in the mud. Mountain bogs are also habitats to many game species as well as species of conservation concern. This means wildlife such as the wood duck and ruffed grouse live alongside rare plants and amphibians such as bunched arrowhead and numerous salamander species.

In North Carolina, the smallness and isolation of these mountain bogs is of particular importance in light of recently proposed wetland regulation updates from the state legislature. Although wetlands are generally protected under the federal Clean Water Act, regulation of isolated wetlands is left up to the state. The current draft legislation would increase the size required for a wetland area to trigger environmental protection. Given that mountain bogs are typically small, the proposed regulations would make them particularly vulnerable to development.

The importance of bogs has not gone unnoticed, however, and the proposed legislation makes conservation efforts all the more relevant. In 2012, the U.S. Fish and Wildlife Service began work on the Mountain Bogs National Wildlife Refuge to protect, restore and manage the unique wildlife habitats. Promoting these goals will involve connecting people to nature and developing landscape-level conservation and conservation partnerships. The proposed refuge would ultimately include as many as 23,000 acres spread across thirty sites in western North Carolina and East Tennessee.

According to Gary Peeples, the man spearheading the proposal from the Fish and Wildlife Service office in Asheville, N.C., the refuge is a chance to “make a big step forward when it comes to bog conservation … especially in the conservation of those federally threatened and endangered plants and animals.”

Conservation areas for the project include the bog itself, the surrounding upland area, and when applicable, an area upstream. The proposal has already received federal approval and widespread support from local nonprofits and private landowners, but, Peeples says, “the biggest limiting factor right now is money to purchase land.” 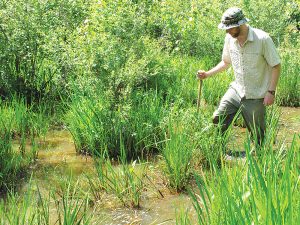 A volunteer with the U.S. Fish and Wildlife Service monitors the population health of the elusive and endangered Appalachian mountain bog turtle. Photo courtesy of Gary Peeples of USFWS

This means the project will happen in pieces, with land parcels being bought as funding is approved by the federal Land and Water Conservation Fund. Peeples points out, though, that “the bigger picture here is the conservation of the bogs,” and the U.S. Fish and Wildlife Service also works with landowners who wish to manage and conserve their privately owned bogs apart from the National Wildlife Refuge.

Once acquired wetlands in the refuge are stable enough to allow public access, recreational activities such as hunting, birdwatching and wildlife photography will take priority. The goal is to ensure the health and survival of bog ecosystems for the sake of their inhabitants as well as for curious naturalists, eager to slog through the mud and discover one of the regions’ rarest gems.

Endangered Inhabitants of the Mountain Bogs 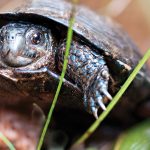 The mountain bogs of Southern Appalachia are one of the bog turtle’s few remaining homes. As North America’s tiniest turtles, they are prized in the pet world for their small size and distinctive coloring — particularly the bright orange patches on either side of their head.

Measuring only 3 – 4.5 inches long, bog turtles feed mainly on seeds, insect larvae, beetles and millipedes and are much more concerned with avoiding predators than being one. Though bog turtles have multiple natural predators, human impact through poaching and habitat loss are responsible for their status as a critically endangered species. 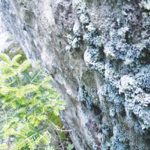 High in the fog of lofty elevations, deep in the mists of river gorges, or nestled in the dampness of mountains — these are some of the only bogs are the only places one can find the rock gnome lichen, a fungus unique to Southern Appalachia. Clustering on vertical rock faces, the blue-gray lichen gets its nutrients from water and sunlight and reproduces asexually at a very slow rate. Trampling and soil erosion from hikers and rock-climbers contribute to the rock gnome lichen’s endangered status. Habitat destruction due to invasive insects killing trees that shade the lichen is also a major cause. 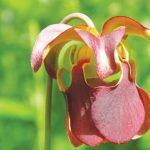 Found in only a few counties along the western North Carolina/ South Carolina border, the endangered Mountain Sweet Pitcher Plant is specifically adapted to the low-nutrient environment of mountain bogs. Like most plants, the Mountain Sweet has photosynthetic leaves that convert the sun’s energy into usable sugars. However, while most plants use their roots to gather additional nutrients from surrounding soil, a bog offers few freebies, so the Mountain Sweet opts for a more lively food source. Small, nectar-seeking insects are lured into the plant’s pitcher organ, an upright, leafy tube lined with hairs, and greeted with a bath of enzyme-rich digestive fluids that break down their bodies into the nutrients the plant needs. North Carolina has already claimed the Venus Fly Trap as the state’s official carnivorous plant, but the Mountain Sweet Pitcher Plant stands out as a regional treasure.