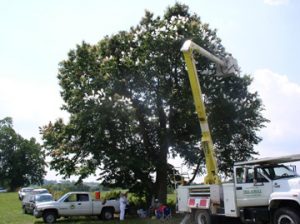 In Adair County, Ky., scientists pollinate a pure American chestnut tree that will parent backcross chestnuts. The tree is a rare survior of the chestnut blight. Photo courtesy of Micheal French.

When Daniel Boone traveled through Appalachia, the tall trunks and sweet nuts of the American chestnut flourished. But to most modern residents, stumbling across a full-size American chestnut in the woods is as likely as spotting an eastern cougar. Unlike the cougar, however, the chestnut is making a comeback.

During the American chestnut’s golden age, the tree was prized for its straight-grained wood. The deciduous giants flowered in summer, leading to reliable, copious nut yields that fed mice, squirrels, turkey, deer, bears, people and livestock.
But in 1904, a forester at New York’s Bronx Zoo saw an unfamiliar orange fungus on some of the zoo’s chestnuts — the trees soon died, and the fungus rapidly spread. What became known as the chestnut blight traveled at a rate of 30-50 miles per year, carried by humans to other areas.

“People felt like the forests were dying because about 25 percent of the canopy cover of the forest was American chestnut,” says Michael French, a forester with The American Chestnut Foundation. By the 1950s, about 4 billion trees were lost across the East.

The Asian fungus enters through a wound in the bark, cutting off the tree’s circulation and killing everything above ground. The roots, however, survive to foster a new generation of sprouts. These young trees can live for decades in the understory and can grow 10 feet during the first year of ample sunlight, but because of that growth they also develop a mature tree’s gnarly bark. That bark increases the tree’s susceptibility to blight, and the process starts over.

To restore this magnificent tree, in 1983 The American Chestnut Foundation began breeding the stately but vulnerable American chestnut with its crooked but blight-resistant Chinese cousin. The half-and-half trees were again crossed with an American parent, resulting in trees that were 75 percent American. As those trees grew, they were challenged with the blight to see which inherited strong Chinese disease resistance. Trees with high resistance and good American characteristics were crossed with another American parent. Researchers repeated this Darwinian process to create trees that are 15/16 American, with leaves and timber qualities similar to pure Americans.

Two of these trees were intercrossed, and the best of their offspring open-pollinated. Those seedlings are now being introduced to the rigors of the real world.

“We’re not going to stop at this stage, we intend to increase the blight resistance and American characteristics in our trees, but we also want to get these trees back out there as quickly as possible,” French says. The American Chestnut Foundation plans to breed three more generations to create trees with over 99 percent American character.

But the foundation has another introduced pathogen to tackle. Chestnuts in the Piedmont of North and South Carolina began dying in the mid-1800s, and when the organization’s Carolinas chapter tried planting hybrid chestnuts in 2001, most of them failed due to a water mold called Phytothphora that causes root rot. Luckily, some Chinese chestnut families are also resistant to Phytothphora, so researchers don’t need to start from scratch in their attempt to establish a fleet of trees that can thwart both blight and root rot. 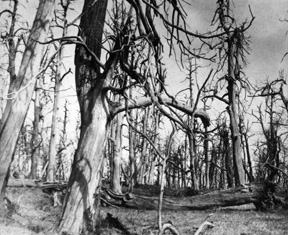 People tried to stop the blight from spreading by cutting down hundreds of miles of chestnut trees. The containment effort failed. Photo courtesy of the Great Smoky Mountains National Park Library.

The ultimate test for the backcross chestnuts is whether they can propagate when faced with forest competition. A Conservation Innovation Grant from the USDA Natural Resources Conservation Services will help fund the planting of approximately 250,000 hardwood seedlings, including more than 14,000 potentially blight-resistant American chestnuts on 12 former surface mines in Pennsylvania, Ohio, Virginia, West Virginia and Kentucky by 2014.

Reclaiming surface mines is complicated, and meaningful reforestation is a rarity on the 2,300 square miles of Appalachia that have been surface mined. But a forestry reclamation technique developed in the mid-2000s shows promise on the 15 square miles where it’s been applied, and more land is permitted for this type of reforestation. With this grant, the chestnut foundation can partner with mining companies on active mine sites and work with landowners in places where reclamation is complete but reforestation unsuccessful.

Including hybrid chestnuts in reforestation efforts will let researchers see how the trees fare in different areas and in competition with other species. If the trees pollinate well, these plantings will help spread the chestnut across its former ridgetop range. French is also hopeful that well-drained mine spoils might make conditions more difficult for Phytothphora root rot.

In April, the chestnut foundation and a host of partners and volunteers completed a planting on 22 acres of a former surface mine in Schuylkill County, Pa. The site, the first of its kind funded by the new grant, now boasts more than 1,000 backcross chestnuts among its hardwood seedlings. The foundation has enough young trees to plant five more sites in 2013.

The project’s results, however, won’t be certain for 80 to 100 years. “We won’t know how successful we were until we have chestnuts back out there in the forest reproducing and taking care of themselves,” French says.