Is There A Kumbaya Moment Coming for the National Forests? 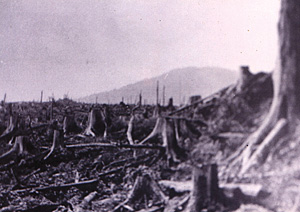 The disastrous late 19th and early 20th century clearcutting of the Southern Appalachians destroyed one of the world's most precious ecosystems. The 1911 passage of the Weeks Act gave the US Forest Service the chance to start heal the wounds. Photo courtesy of Randy Johnson

As wildflowers and buds break out this spring in the Southern Appalachians, hope that a greener fate for federal forest lands will bloom as well.

On Feb. 9, 2012, the U.S. Forest Service and a handful of public and private collaborators — not all of them very collaborative in the past — announced a ten-year, $4.5 million plus effort to “restore” the forest landscape of Pisgah National Forest’s Grandfather Ranger District.

In the Blowing Rock area of western North Carolina, where the Grandfather District has seen its share of controversy, the move is seen as a harbinger of hope.

As recently as 2006, a dispute erupted over the size and visibility of timber cuts in Pisgah National Forest, just below the tourism town of Blowing Rock. But the “grandaddy” of all timber controversies exploded in 1988 in this same area. That battle and the following debate over clearcutting altered the course of forest management practices not only in the east, but the entire United States.

By the 1980s, many forests had offered timber management plans, but the continuing role of clearcutting had brought challenges from the public. By late May 1988, gaping timber cuts were visible in Pisgah National Forest under the Linn Cove Viaduct on the newly-opened Grandfather Mountain portion of the Blue Ridge Parkway. Votes of opposition came from chambers of commerce and tourism organizations. While travel ads for Asheville, another state tourism hot spot, pictured the city’s watershed forests — a clearcut had crept into the pristine scene of the North Carolina High Country. Outrage ensued.

Logging and tourism had squared off, and the scenic status of the Blue Ridge Parkway was at the heart of the debate.
It’s extremely difficult to argue that the Forest Service even considered scenery in 1988, when glaring timber harvests appeared directly below the final link of the Parkway at the same time it was opening to the public. Gary Everhardt, Parkway Superintendent at the time, didn’t like the clearcuts — neither did the citizenry urging towns and organizations to vote for resolutions of opposition. 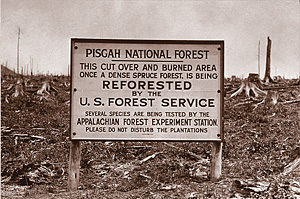 the 80s, clearcutting has become an ever-smaller part of Forest Service timber harvest methods, in part due to protections ushered in by the Endangered Species Act. Ensuing years have seen ongoing reductions in timber harvesting on Forest Service land in general, and a dramatic rise in logging on private land.

The clearcuts of the 1980s beneath the Parkway’s viaduct may now be forgotten, but the viewshed of the Parkway — and the economic importance of scenery in general — has not been. If anything, Appalachian conservationists and tourism promoters consider the protection of mountain scenery more critical than ever.

In 2006, timber cuts were again planned for the Globe, an area of Pisgah National Forest near Blowing Rock, rekindling logging fears and it’s potential negative impact on the Parkway and area tourism.

When new timber cuts were announced, the U.S. Forest Service handled local public input in a fashion that led some to seek permanent guidelines to protect scenery. Conservationists, spearheaded by the grassroots organization Wild South, called for designation of a 25,500-acre area below Grandfather Mountain to be permanently protected as a National Scenic Area.

Despite the passage of resolutions by local and county governments supporting the designation, the movement stalled.

The emphasis then shifted to the opposition of the 2006 timber sale. Research by conservation groups revealed that the sale included “old growth” tracts containing trees up to 300 years old.

By summer 2010, Candice Wyman, then acting public affairs officer for U.S. National Forests in North Carolina, announced a “collaborative process” with conservationists that successfully achieved a “redirection” of the timber sale — including a reduction in logging area acreage from 212 acres to 137. Though no clearcuts were proposed, preservation groups were ecstatic that the Forest Service eliminated “old growth” trees from the harvest and pledged to reduce the visibility of the cuts with in surrounding areas.

Despite the success, the National Scenic Area proposal for the Grandfather District appears unlikely to overcome formidable political hurdles. Nevertheless, with plans for the Globe timber cuts ultimately and amicably amended — with a significant emphasis on serious “restoration” of wildlife habitat — some argue that the event prompted a new ethos of Forest Service management in the Southern Appalachians.

One of these proponents is Gordon Warburton, a supervising wildlife biologist for the North Carolina Wildlife Resources Commission. Warburton’s tenure at the Commission began in the early 1980s with the release of the Peregrine falcons on Grandfather Mountain. Since then, he has worked on many other projects including the regeneration of wild turkey populations. “There’s a brand new Forest Service out there,” Warburton says. “The agency had a problem in the 1980s, with legacy logging, and they live with that. We (the Commission) used to ask that they hold back on some of their land disturbance activities. Today, they’re almost solely focused on ecological restoration. Glaring timber cuts have gone away.”

When Warburton hears “the designation ‘national scenic area, it makes me think that very little forestry will be permitted, and that’s not good,” he says. “You need to put on your ‘wildlife glasses’ and see that most of our forests are 80-90 years old, and that’s bad for a lot of wildlife and for the diversity of the forest.”

Even with smaller and fewer timber cuts on national forest land, and growing timber harvests on private land, Warburton says, “that’s not enough. The American Birding Conservancy says that young forests are one of the top twenty most endangered habitats for birds in the Eastern United States.”

“There’s a new kid on the block,” he says, “and it’s a philosophy called ‘ecological restoration’ of habitat — and that takes being able to introduce disturbance.”

Increasingly, conservationists and forest managers share the same priorities, says Ben Prater, associate executive director of Wild South. Prater maintains that national scenic areas have flexible management guidelines and that the original draft of the legislation proposing the Grandfather National Scenic Area explicitly allows for management that benefits wildlife and ecological restoration, including the use of prescribed fire.

Despite the apparent agreement on some basic principles, Prater says, “Restoration is a new philosophical approach, but it has a long way to go. Clear cuts are out, but for the folks who wanted clearcutting — and there are serious pro-timber folks still there — even ecological restoration has been a tough pill to swallow. We’ve changed, the Forest Service is changing, but it has a way to go.”

That’s where the new restoration project in the Grandfather District, announced in February, comes in. There is significant money to be spent on projects that reduce invasive non-native species, increase forest species diversity, treat important stands of hemlocks against the hemlock woolly adelgid, enhance habitat for the rare golden-winged warbler and introduce controlled fire into areas where fire is part of the natural ecosystem and fuel loads are now dangerously high.

Groups joining the Forest Service in that agreement include the N.C. Wildlife Resources Commission, The Nature Conservancy, Wild South, the Southern Appalachian Forest Coalition, The Southern Forest Network and the Western North Carolina Alliance, among others.

“This collaboration between the Forest Service and the community is new, and it’s an awesome emergence from controversy to a new age of forestry,” Prater says. “This is a great reflection that the future holds a focus on regenerating ecological diversity and working with local communities.”

“The Forest Service is a resource extraction endeavor, after all,” he says, “but the Obama Administration is funding this effort and it’s a marquee project for our region.”

When Marisue Hilliard recently retired as forest supervisor in North Carolina, she said one of the things she was most pleased with was the eventual end result of the Globe timber sale.

“While the timber sale was controversial at first, I believe it worked out well in the end,” Hilliard said. “The biggest lesson I learned is that you need to take time to work through issues that people feel passionately about. Sometimes you have to slow down to make sure that things are done right.”

No one knows for certain, but perhaps the time will come soon when all groups involved will sing a rousing version of “Kumbaya” together around a campfire. There’s always hope.