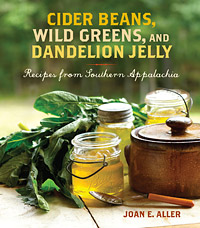 “Cherokee women traditionally raised crops of corn, beans, squash and sunflowers. These were preserved and saved for winter. They gathered wild fruits like persimmon and mulberry and made bread from dried persimmon flour. Hickory nuts were gathered and the meats removed and added to water, making a drink called hickory milk, or ganu gwala sti.” Joan E. Aller in Cider Beans

This is a serious cookbook, and Aller has her priorities straight. In it, food is given the respect true cooking deserves. Sure, some of the recipes include such ecologically-smart ingredients as ramps (harvest wisely!) and corncobs, but this isn’t a wild foods manifesto. While Aller dabbles in regional background — such as the fact that corncob jelly is an old Cherokee recipe adopted by the early southern highlanders — she stays focused on what matters most, which is corncob jelly’s plum-like taste and delightful golden color.

The book’s first chapter illuminates the people who settled in the lush mountains of southern Appalachia, perfect for reading while Butternut Squash Soup with Sweet Tea and Ginger simmers on the range.

But Aller doesn’t dwell too much on history, and the following nine chapters are stuffed with recipes. Some draw from folk knowledge or the author’s friends, but the majority come from regional dining establishments. The breakfast chapter, in particular, relies on inns and bed & breakfasts; with offerings such as Apple-pork Brunch Pie and Lemon-pepper Popovers, it’s understandable why Aller turned to the pros.

Aller shows she’s in touch with the region’s culinary roots with classics such as Grits and Redeye Gravy, Tennessee-Style Corn Pone and Spiced Cranberry Pork Roast. There are several more complex recipes, such as German Bierocks — a dough-wrapped cabbage and meat pie — but, most recipes are straightforward and approachable.

I tried my hand at the Yam Cakes recipe, which Aller describes as a traditional Cherokee dish. Her instructions were easy to follow, and even with my minimal baking skills the process was seamless. They were quickly snatched up at a friend’s fall-themed potluck, and their popularity had me promising to pass the cookbook along.

I discovered one inaccuracy in the book — true yams aren’t grown in the United States. Rather, they are endlessly confused with their American cousin the sweet potato.

Cider Beans is not only an excellent cookbook, it is also a cultural project. Musings on topics such as hogs, synchronized fireflies and the history of rye coffee are scattered among its pages. A two-page southern Appalachian dictionary explains regional dialect to the unfamiliar, with definitions for phrases such as “a coon’s age” and “mess of.”

Ultimately, however, the sidebars about music and moonshine are like the Sausage and Cornbread Dressing that accompanies her Roast Crisp-Skinned Turkey; they’re a nice side dish, but the main meal satisfies. 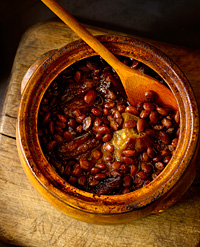 Pick over the beans and discard any stones and wrinkled beans. Rinse well and place in a large bowl. Add cold water to cover by three inches, cover, and let soak for 12 hours.

Drain the beans and transfer them to a heavy saucepan. Add the cider and bring the beans slowly to a boil over medium heat. Boil gently, uncovered, for about 30 minutes. Remove from the heat and drain the beans, reserving the cooking liquid.
Preheat the oven to 300°F.

Layer half of the salt pork slices on the bottom of a 2-quart ceramic bean pot or other deep baking dish. Spoon the beans into the bean pot, and then bury the onions in the beans.

In a small saucepan, combine the sorghum molasses, dry mustard, and salt and place over medium heat to dissolve the mustard and salt. Pour the hot mixture evenly over the beans, and top with the remaining salt pork slices. Pour in the reserved cooking liquid and add hot water as needed to cover the beans. Cover the bean pot.

Bake for four hours, and then uncover the pot and add more water if the beans seem too dry. Re-cover and continue to bake for 1 to 2 hours, until the beans are tender. Serve hot directly from the pot.