Dear Joe Manchin, Arch Coal Has a Plan, And it is Not You.

The FArCES of Coal:”With Our Head in the Sand, As Loud As We Can” Edition

Well, I’m not sure how it happened. But it seems like southern West Virginia has survived its first post-apocalyptic, economy-annihilating, way-of-life-ending weekend after EPA heroically vetoed Arch Coal’s Spruce Mine permit last Thursday. As bad as Joe Manchin and Nick Rahall said life was going to be after the veto, myself and most folks in West Virginia ended up having a pretty decent weekend, all things considered. Heck, we even learned that despite the snow many if not most nearby residents are celebrating EPA’s veto of Spruce #1 mine. 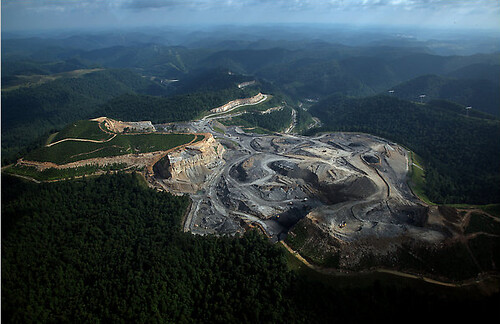 Which leads me to wonder…has anyone ever been so loud and proud about shoving their head in the sand and ignoring the cries of their constituents and colleagues, the consensus of scientists, and the pleading of health professionals as loudly as Joe Manchin and Nick Rahall? Senator Manchin certainly hasn’t had a very positive first few weeks in the United States Senate. In fact, despite not taking too many big votes, he has found that his actions have already left him with a lot to apologize for. He set another high bar last week when EPA announced its decision on Spruce. Not only was his rhetoric irresponsible, but his information is just plain incorrect – particularly in asserting that EPA was “retroactively” vetoing this permit.

First of all, if you do your research (as Ken Ward does) you know that EPA never signed off on the Spruce Mine Permit. GOT THAT? EPA has raised concerns since the very beginning about this permit, and when Arch Coal was pressed to address those concerns, what did Arch Coal do for the people of Appalachia? They walked away.

Despite EPA’s willingness to consider alternatives, the company did not offer any new proposed mining configurations in response to EPA’s concerns based on science and the law.

SNL Financial goes into further detail about a meeting between top EPA officials and Arch Coal from November 16th,2010:

“The permittee also indicated that other approaches previously discussed, such as ‘sequencing’ or ‘phasing’ of valley fills, remained unacceptable to Arch Coal, Inc., due primarily to economic considerations,” EPA said. “In the meeting, the permittee did not propose new or additional corrective actions for EPA’s consideration.”

But that’s not surprising. Arch Coal has been divesting in Central Appalachia for years, as it is becoming less profitable and more expensive to mine here due to declining supply across the Central Appalachian Region. 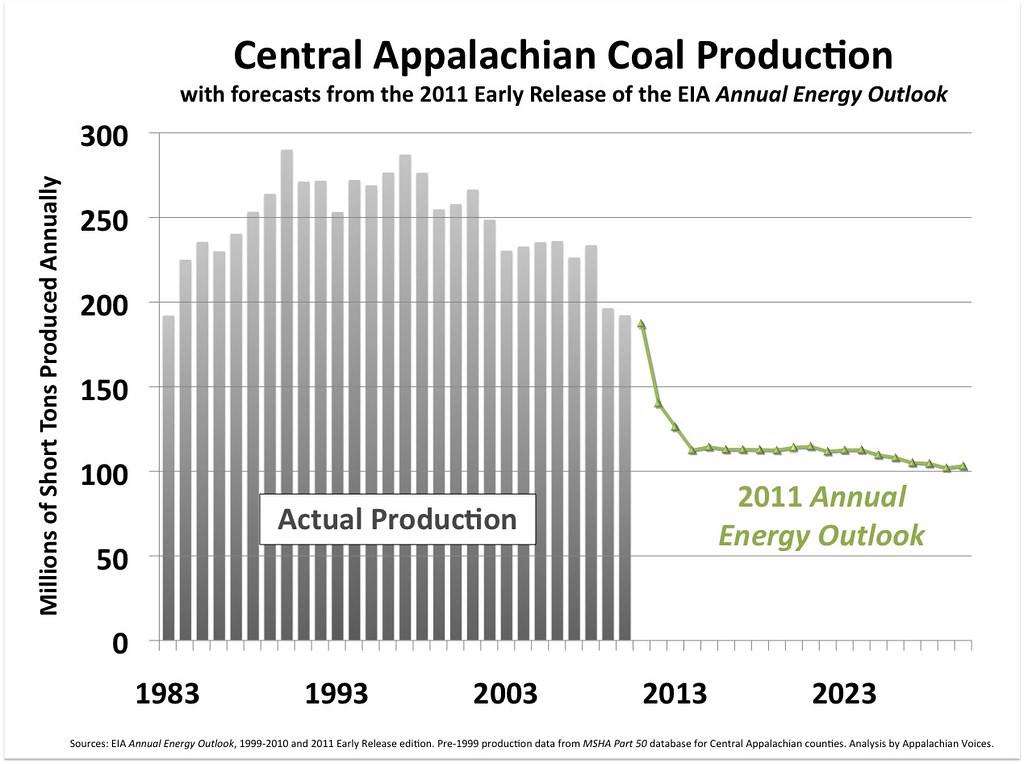 Since 2008, production has dropped 20% in Central Appalachia. Arch knows this, which is why it is not surprising that they are leaving Central Appalachia. In fact, last week we learned that Arch has bought a minority share in the extremely controversial proposed West Coast coal export terminal.

“This transaction gives us a direct stake in participating in the growth of U.S. coal exports off the West Coast,” said Steven Leer, Arch’s chairman and CEO. “With our superior operating position in the Powder River Basin and Western bituminous region, we have the capability to service growing coal demand in Asia, the world’s largest and fastest-growing coal market. We believe this first project — along with others in the pipeline — will provide Arch with more exposure to the seaborne thermal market and will further unlock the value inherent in our western coal assets.”.

I don’t see anything in there about Arch’s long-term interest in protecting the prosperity and jobs of Central Appalachia (although, they are also a leading candidate to buy out the notorious Massey Energy Company). But why were Arch’s shares still down in the last quarter in Central Appalachia?

Arch attributed the shortfall to poor rail service affecting shipments of its Appalachian coal as well as “geologic challenges” at its Mountain Laurel mining complex.

They’ve lost. In a desperate attempt to re-brand their actions (Hilltop mining? Open-pit mining? Seriously?!) we see the coal industry attempting to ignore that the impacts of mountaintop removal are real. Joe Manchin and Nick Rahall are making the political calculation that they want their legacy to be tied into a disappearing industry that is decreasingly important except for its negative impacts on the health of their constituents. But the truth (as Congressman Rahall has admitted in his more candid moments) is that the coal party in Central Appalachia is just about over. The long unruly night is ending, the sun is coming up, the neighbors have called the cops, and Joe Manchin and Nick Rahall are determined to be there to answer the door when they show up. The party is over. Don’t trust me? Don’t trust Congressman Rahall? Well, lets look at what Arch Coal is saying.

An Arch slideshow from September lets us know exactly where they stand. 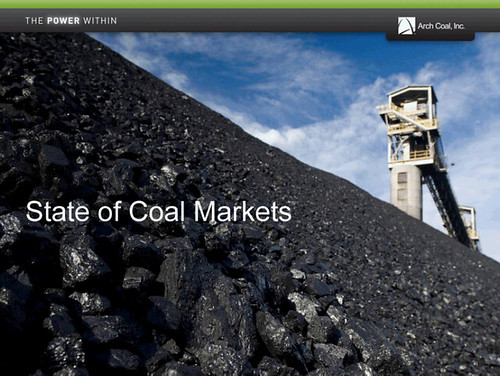 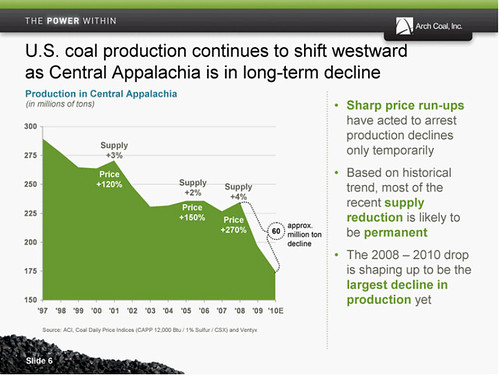 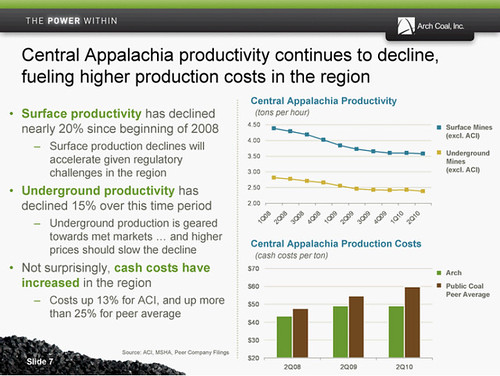 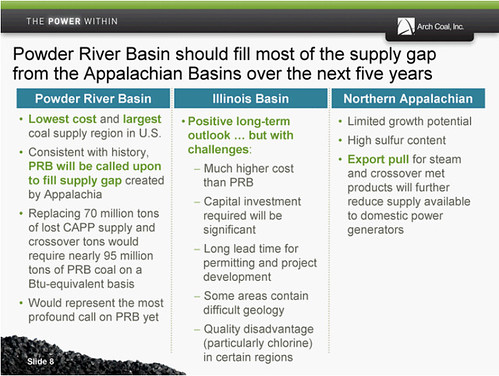 There is the story of Central Appalachian coal right there in 4 steps.
1) Appalachian coal production is declining…
2) Productivity is decreasing…
3) Costs are rising…
4) Coal companies are going elsewhere.

That is not some “environmentalist” or “humanitarian” organization speaking. That is the coal industry. The Joe Manchins of the world refuse to acknowledge that Central Appalachian coal is almost gone, deny mountaintop removal is costing us lives, and seem content to expend all of their time and political capital defending the practice of mountaintop removal. They have already lost in the court of reality. But that doesn’t always matter in Congress, which is where the battle will continue to take place.

Mr. Rahall, who said he was informed of the EPA’s decision early Thursday in a voice-mail message left by EPA Administrator Lisa Jackson, predicted there would be efforts in Congress to overturn the EPA’s decision.

We’ve always known it would come down to Congress, and now the coal lobby is starting to rev up their presence in DC after Republicans retook the House in November’s elections. Congresswoman Shelly Moore Capito, in the new majority, went straight to the new Republican Chairman of the Transportation and Infrastructure Committee John Mica (FL-07) asking him to review the Clean Water Act’s 404 permitting process. With an Orwellian fervor, the Congresswoman adds that “there has to be a middle ground.” What she means, of course, is that no coal anywhere needs to be regulated in any way. She makes up spectacular numbers along the way, such as the oft-stated lie that there are 80,000 coal mining jobs in Central Appalachia. Experts (in other words, the people who actually keep track of those numbers) put the number of coal mining employees at less than half of Capito’s made up number.

Senator Byrd, famously, said that a majority of Americans and Members of Congress oppose mountaintop removal. Congressman Rahall said that the bipartisan Clean Water Protection Act (which would stop valleyfills) has over 400 votes in the House and would pass easily if not for his ability to hold up the legislation. There were 173 cosponsors in the House and 12 in the Senate on legislation to end valleyfills, with dozens more prepared to make the correct vote at the end of last Congress. That is in large part due to the work that Appalachian Voices, the Alliance for Appalachia, and impacted citizens have been doing for may years to educate members of Congress on what mountaintop removal is and why it needs to end. We are not alone in this effort, and members of Congress are responding vigorously to the false allegations of Congressman Rahall, Congresswoman Capito, and Senator Manchin.

Congressman Pallone Thursday praised the Environmental Protection Agency’s decision to halt proposed disposal of mountaintop mining waste into West Virginia streams, a long-standing practice in the industry that has disrupted the biological integrity of an area about the size of Delaware. Exercising authority under the Clean Water Act, EPA revoked a permit application for Mingo-Logan Coal Company’s Spruce Mine No. 1 located in the south west region of West Virginia.

“I applaud EPA for this landmark decision that will reduce the harmful effects of this practice on the environment and human health,” said Pallone. “Mountaintop removal mining is a dangerous practice that is harmful to our environment and unsafe for those living in nearby communities. Blast material from these types of mines pollutes streams and rivers and contaminates water supplies, often turning local tap water orange and even black.”

If approved, this permit would have buried more than six miles of headwater streams, directly impacted 2,278 acres of forestland, and degraded water quality in streams adjacent to the mine. This veto, an extremely rare action in the history of the Clean Water Act, demonstrates the EPA’s seriousness in curtailing mountaintop removal.

“This permit revocation is a sign of a larger shift from the Bush administration’s mountaintop mining policy, that for too long has fouled water quality, wildlife and human health in Appalachia,” added Pallone.

Congressman Pallone is the lead cosponsor of the Clean Water Protection Act, which would put a stop to the dangerous practice of mountaintop removal mining. The legislation had 172 bipartisan cosponsors in the 111th Congress and Pallone is currently gathering original cosponsors before reintroducing the bill in the new Congress.

Pallone also wrote to EPA in October 2010 supporting the administration’s efforts to curtail mountaintop removal mining under the Clean Water Act. Forty-nine other Members of Congress signed the letter, which also supported EPA’s preliminary veto of the Spruce Mine permit.

Senator Ben Cardin (D-MD), Chairman of the Subcommittee on Water and Wildlife

“In vetoing the Spruce Mine Permit, EPA did the right thing today for the health of the people and the natural resources of Central Appalachia,” said Senator Cardin. “EPA’s action halts the permanent, large-scale destruction of some of the oldest mountains on earth and the dumping of toxic mining waste into neighboring streams. This veto protects the richest temperate freshwater ecosystem in the world, communities’ health and wellbeing, and a way of life cherished for generations.

“Mountaintop removal mining, which produces less than five percent of the nation’s electricity, has destroyed over 500 mountains, resulted in burying 2,000 miles of mountain streams and polluted drinking water sources with arsenic, selenium and mercury. I look forward to working with the Administration and my colleagues to bring this devastating practice to a permanent end and ensuring the residents of Central Appalachia have access to the clean and safe water all Americans deserve.”

Appalachian Voices thanks Congressman Pallone, Senator Cardin, and the 100s of other members of Congress who are prepared to make a stand to protect the people of Appalachia. As the battle heats up in Congress, we will be there to fight for our homes, our mountains, our communities, our water, and each other. We will always be there.