Empty hives around the globe have alerted beekeepers and scientists to a crisis: honey bees are disappearing, and no one knows exactly why. 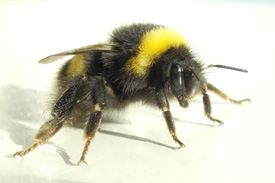 According to the United States Department of Agriculture (USDA), honey bees are essential for production of over 90 food crops and $15 billion in added crop value. Honey bees are the primary insect pollinator used in commercial agricultural production, for crops such as, almonds, blueberry bushes, apple and peach trees, squash and cucumbers.

“With the loss of such an effective pollinator, the prices of those crops—and many others—could increase,” said Dr. Sean Clark, associate professor of agriculture and natural resources at Berea College.

Populations have been in decline since the 1980s when varroa mites, an ectoparasite that affects honey bees, were introduced.

In fall 2006, the first reports of what has been dubbed colony collapse disorder (CCD) were filed.

A survey conducted by the Apiary Inspectors of America, a nonprofit organization established to promote better beekeeping conditions in the United States, and the Agricultural Research Service (ARS), reported that managed honey bee colony losses reached 33.8 percent this winter, a 4.8 percent increase from last winter.

And according to the USDA, some colonies have lost over half of their populations, some cases as high as 90 percent.

“The issue is that it’s unstable,” said Dr. Dave Tarpy, associate professor and extension apiculturist at North Carolina State University. “We don’t go year to year knowing how many bees we have, so that we are able to meet the pollination requirements. The issue here is to make sure we have a reliable, healthy honey bee population so that our food production requirements are met.”

The exact cause of CCD is still under investigation, but scientists believe the die-off is the result of a combination of factors.

A healthy colony of honey bees has approximately 60,000 workers in the summer season in order to sustain the honey bee eggs, termed the brood.

A hive on the verge of collapse will show signs of a dwindling workforce, characterized by bees flying away from the hive and dying without returning. A hive that is showing signs of CCD will have an apparently healthy queen who is still laying eggs, but affected bees may not consume nutrients provided by the beekeeper.

A hive that has collapsed suffers sudden, widespread death. The few left are generally not a strong enough population to be viable pollinators or honey producers.

In a hive impacted by CCD, food stores, such as honey and bee bread, are often present, hive raiders, such as the wax moth and small hive beetle, who would normally have invaded the supplies, delay their attacks for unknown reasons.

The USDA has labs dedicated to researching causes and remedies to the honey bee malady in Beltsville, Md., Baton Rouge, La., Weslaco, Texas, and Tucson, Ariz.

According to the ARS, there are four major categories of investigation regarding potential causes of CCD: pathogens, parasites, environmental stresses and management stresses.

Some scientists believe that pathogens, such as Nosema, a microbe that attacks insect guts, and Israel acute paralysis virus, could play a role in CCD.

Parasites like varroa mites and tracheal mites, may be contributing to the negative impacts on
bees, but experts believe that they may not be the only factor.

Environmental stresses, including the introduction of pesticides, are under greater scrutiny, particularly with the release of a study published in the scientific journal Public Library of Science that found 121 different types of pesticides in samples of wax, pollen, bees and hives.

In her paper “Protecting Honey Bees from Chemical Pesticides,” Maryann Frazier, senior extension associate at Penn State, wrote: “Chemical contamination is one of the possible contributing factors that is being investigated.

These include chemicals being used within the hive for mite and disease control as well as chemical pesticides used on crops that may inadvertently find their way into hives.”

Management stresses, such as poor nutrition and strain incurred by transporting the hives long distances to different pollination sites, are also possible factors.

As scientists continue to investigate CCD, the mitigation strategies of the honey bee plight are simply maintaining best management practices and trying to improve bee health and habitat.