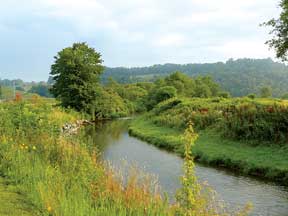 The New River in Ashe County, downstream from the proposed facility. Photo by Christine Arvidson, National Committee for the New River

One community’s demand for drinking water is causing angst among residents concerned about preserving the New River’s historic, environmental, recreational and economic future. It’s a common debate across North Carolina and other states as growing populations demand more from limited natural resources.

The Town of Boone, located in Watauga County, N.C., proposes to build a water intake facility that would pull up to four million gallons a day from a section of the New River’s south fork frequented by canoers, kayakers and fly fishermen. The site is located near the county line. The town’s proposal – which includes running the water through its water treatment facility before returning it to the river – is awaiting review by state and federal agencies before an official 30-day public comment period, but neighboring Ashe County residents are already organizing in protest.

“Who owns the river? It belongs to everyone,” said Mia Hartsook, a resident of Fleetwood, an Ashe County community just downstream from the proposed facility. She and other residents, known as the New River Stewardship Committee, have gathered more than 400 signatures on a petition opposing the project, including the signatures of Boone, N.C. residents and out-of-state tourists.

The petitioners question the methodology used for projecting Boone’s future population and water needs, as well as the scientific validity of data used by the town to determine the river’s flow rates. They claim there’s been little coordination with neighboring governments in the planning process and believe that withdrawing and returning water to the river could hurt tourism. They also fear untreated waste pharmaceuticals in the return water – a growing concern in many municipalities across the U.S. – could cause environmental harm.

They also point to the New River’s American Heritage River designation, which President Bill Clinton signed in person in a ceremony along the river’s banks in Ashe County.

“We feel Boone is making decisions that are regional in terms of water rights and that will clearly affect Ashe County and others. We’re not opposed to growth, but we feel everybody who is a stakeholder should be involved in the decision making,” Hartsook said.

According to a project description available on the Town of Boone website, the town learned in 2004 that it was rapidly approaching maximum capacity from its existing water sources. The Town of Boone implemented a voluntary water conservation program in 2005, an effort that Public Utilities Director Rick Miller calls successful. It has included rain barrel giveaways, free home and business water audits, and educational sessions in the public schools.

A new study shows the town’s population doubling over the next 50 years. Consultants said the proposed site is best from a location and economic standpoint. The same firm, W.K. Dickson, was retained for the environmental assessment.

“We considered reservoirs from Watauga Lake in Tennessee to the Yadkin River in North Carolina, as well as sites in the Watauga River basin. These involved interbasin water transfer, a process that creates quite a few environmental issues,” Miller said.

The Town of Boone claims the proposed site has sufficient water flow from which to withdraw water and still meet state and environmental requirements, based on calculation methods approved by the N.C. Department of Environment and Natural Resources.

Support for the project is being sought in the N.C. General Assembly where Rep. Cullie Tarleton (D-93), who serves both Ashe and Watauga counties, introduced a bill in April 2009 that, if passed, would grant Boone the right “to construct and maintain a water intake system in the waters and submerged land of the South Fork of the New River notwithstanding any public trust rights.” The bill passed first reading in the House and has been referred to the Water Resources and Infrastructure Committee, which Tarleton chairs.

Construction of the proposed facility cannot begin, however, until the environmental assessment is approved by the state and federal agencies. It is uncertain when the agencies will be ready to announce their response.

“Until the environmental assessment report is made public, we don’t know what we’re dealing with,” said George Santucci, executive director of the non-profit group the National Committee for the New River. His advocacy organization, which has fought development of the river in North Carolina and Virginia in the past, has been involved with the Town of Boone’s exploration of the proposed site. It has also conducted its own research. At this point, Santucci said he doesn’t see cause for an environmental battle.

“The research we’ve done doesn’t show any scientific data that the proposed water intake facility will have a significant negative impact,” Santucci said. “If there were a threat, trust me, we’d react.”

When it comes to water usage and water rights, Santucci said it’s easy to point to municipalities as the problem while ignoring the impact of housing developments outside town limits, which rely on wells. “Everyone’s actions impact the watershed, and people need to own up to that and act in accordance. Rain barrels, cisterns, and low-flow showerheads and toilets – people should have these in their own homes.”

Learn more about this local issue at: