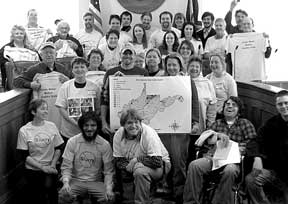 Members of the Sludge Safety Project successfully argued for a reconsideration of slurry injection and, so far, have partially stopped the practice. Photo by Vivian Stockman

In a partial victory for citizens and environmental groups opposed to the process, the West Virginia Department of Environmental Protection declared a two-year moratorium on new permits for disposing of coal slurry by injecting it into abandoned mines.

Coal slurry is a byproduct of coal preparation, a mixture of fine coal particles and water, as well as the chemicals used to remove impurities from the coal before it is sold.

After many hours of citizen lobbying, the state legislature asked the DEP to evaluate environmental and public health ramifications of coal slurry injection.

Once the DEP released its report, a moratorium was declared on new injection permits, although 13 currently operating slurry injection sites will be allowed to continue.

Though SSP sees the study itself and the temporary moratorium as a step in the right direction, the group doesn’t feel the DEP has gone far enough.

“The solution the DEP has come up with is inadequate,” said Maria Lambert, a representative for SSP. “People are going to be left with the same health issues for as long as companies are allowed to inject slurry under existing permits.”

“There is one solution to fixing the problem of coal slurry contamination in West Virginia,” Lambert stated in response to the DEP’s announced plans, “a ban on all slurry.”