Wind Power: A View from the West 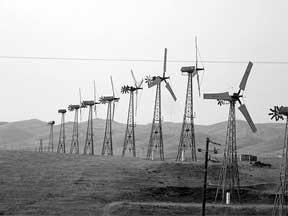 Smaller wind turbine blades turn just at cruising height for the raptors of Altamont Pass, a flat, sloping terrain with strong stead winds located east of San Francisco Bay. The open lattice towers also invite nesting. An estimated 1,700 to 4,700 birds are killed every year, or around one bird for every one or two windmills per year. Wind proponents say taller towers will help solve the problem, but others say the jury is still out. Photo by Bill Kovarik

Climate change is the greatest environmental challenge of our time, and virtually everyone agrees that renewable energy must be part of the solution. Unfortunately, the scramble to implement “green” technologies—primarily wind power—is rapidly transforming landscapes across the United States. And in the rush to erect turbines, wildlife impacts are too often overlooked or underestimated.

Many Eastern environmentalists seem to believe that wind power is just fine for the “empty” expanses of the American West but not appropriate for forested Appalachian ridges. The inconvenient truth about wind power, however, is that turbines take a heavy toll on wildlife here in the West too. And not just at California’s Altamont Pass, which wind industry representatives often point to as a “unique” site because turbines there have killed so many golden eagles and other birds.

In 2007 the National Wind Coordinating Committee—which includes representatives from the wind industry, government agencies and environmental groups—estimated that wind turbines would kill 900,000 to 1.8 million birds annually by 2030. Those numbers are already out of date because the wind industry is growing much faster than predicted, thanks in part to tax incentives and state mandates for the development of renewable energy. The industry’s cheerleaders are environmental groups eager to be “for” something, and well-meaning utility customers willing to pay more for green power.

The U.S. Department of Energy claims that wind power could meet 20 percent of our nation’s electricity needs by 2030. However, doing so would require a threefold increase in the already-rapid rate of installations. University of Cambridge physicist David MacKay recently calculated that even if Americans were able to reduce our energy demands by half, we would still need to cover an area the size of California with wind turbines just to get a third of our power from wind.

Large wind projects are sprawling industrial developments. A single project can have as many as 500 turbines connected by a network of heavy-duty access roads and power lines. The 400-foot-tall machines, with blade tips spinning at speeds that can exceed 200 mph, are not your father’s windmills.

The jury is still out on whether modern turbines kill fewer birds and bats than older, smaller models. The main lesson learned from studies of wildlife mortality at existing wind projects is that location is everything. If wind turbines are responsibly sited—set back from ridgelines, for example—their impacts can be kept to a minimum.

Unfortunately, wildlife concerns do not currently play a major role in siting decisions, which are typically left up to local officials with little expertise. The result is that wind projects are being installed where transmission lines are readily accessible and where prevailing wind conditions show the highest probability for economic profit, with little regard to considerations such as migration routes and cumulative habitat impacts.

Pre-construction surveys can help identify the areas that are best suited for wind development. However, wind developers hire the consultants for these studies, and post-construction monitoring often shows that the wildlife impacts are more severe than “anticipated.” The first wind project constructed in my county killed at least eight times as many raptors as predicted in its first year of operation, and twice as many bats.

I live in the Pacific Northwest, where hydropower once held the same promise that wind power does today: clean, renewable energy without all those dirty, heat-trapping air pollutants. Unfortunately, hydropower has had unintended and unanticipated consequences, decimating salmon runs on the Columbia River and its tributaries. But that hasn’t stopped energy companies from turning the hills above the river into the latest sacrifice zone, with larks and kestrels now going the way of the coho and chinook.

I support the responsible development of wind power, but I also believe that wind turbines kill more than birds and bats. They kill the ethic of conservation. They hold out the false promise of boundless growth and risk-free technology. They suggest that there is a silver bullet that will enable us to reverse climate change without changing our lifestyles.

We’ve all seen those pretty pictures of white blades spinning in blue skies, but how many of us have taken a hard look at a decapitated hawk or a bat with an exploded lung? That is the price of growth. Before we carve deeper into the wild, it’s time to consider the consequences—and whether it might be better to address our energy problems through conservation, improved efficiency, population control, and a simpler way of life.

Dawn Stover lives in Klickitat County, Washington, a hotspot for wind development. She has served on technical advisory committees for three wind projects, and has been an appellant in several cases involving wind project siting.