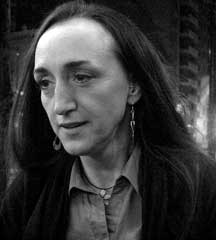 A tireless fighter for Appalachia’s environment, Maria Gunnoe was awarded the 2009 Goldman Prize for “fighting against environmentally-devastating mountaintop removal mining and valley fill operations.” Her advocacy with the Ohio Valley Environmental Coalition has led to stricter regulations for the industry, but she endures constant threats and harrassment from neighbors who work in the mines. Photo by Jamie Goodman

Maria Gunnoe’s family connections to her land in Boone County, W. Va, stretch back to Cherokee ancestors who hid from forced removal by the government in the 1830s. Her Cherokee grandfather purchased land there in the 1950s; she herself was born and raised there, learning how to hunt, fish and gather plants in the surrounding forest.

Since 2000, when a 1200-acre mountaintop removal mine site began operating on the ridge above her home, Gunnoe has watched that land she is so deeply connected to be ravaged. Floods began to hit her property with increasing frequency, eventually destroying her ancestral home and contaminating her family’s well with mine waste in 2003.

Gunnoe has since become a staunch advocate in her community, working with Ohio Valley Environmental Coalition on the need for safety regulations for coal slurry and an end to mountaintop removal mining. Her leadership at the grassroots level on this issue led to her selection as the winner of the 2009 Goldman Environmental Prize for North America. The award, given to a grassroots environmental hero on each of six continents every year, was created by Robert Goldman and his wife Rhoda in 1990.

Gunnoe answered questions from Appalachian Voices and other media about the prize and the issues she works on in a May 13 interview sponsored by Orion Grassroots.

Where did you first hear about the Goldman Prize and how has it affected you?
The first I heard about [the Goldman Prize] is of course when the mountaintop removal and flooding and sludge injection and all of the above moved into the hollow behind my homeplace. I was seriously and adversely impacted by mountaintop removal flooding in 2003; it literally washed away acres of my land.

Through trying to find somebody that cared, I met Judy Bonds … shortly after [she] had been awarded the Goldman Award. Judy helped to educate me on local issues and we’ve worked together ever since.

Have there been any hopeful signs from the EPA recently?
[EPA’s contradictory statements on changes to the review process for permits] created not only confusion, it’s also created just a mass extraction here, the coal industry’s speeding up if anything. Unfortunately, with the coal industry while their laws–the laws that supposedly guide them– […] are being reviewed, they’re allowed to move forward.

In Lindytown– that’s in Boone County near a town called Twilight–the houses in this town are being torn down, and that’s because of the fact in order to get to the coal they’re having to swing the arm of the dragline over the top of this community.

So the coal company came in and forcibly bought people out– and I say forcibly because they made the quality of life there so horrible that people literally had to leave in order to protect their health.

Now what it’s doing on the ground, it’s extremely and permanently affecting residents and communities here. There’s literally communities that are disappearing into nonexistence. What [the EPA is] investigating or what they’re looking at is on paper. If you come into these communities and you see for yourself what is going on, just the human side of you tells you that this is wrong. I mean what’s going on on paper is one thing but what’s going on on the ground… (sigh)

[…] It is a human rights issue […] My family ended up here through the removal of the Cherokee from the southern valued lands, and when they were forcibly removed from that land, they followed the rivers […] and hid in these hills and hollows. Are we at a point in this society where we’re willing to continue forced removal of people for extractive industries? It’s not only here in West Virginia. It’s bad here in the Appalachian region, but the extractive industries, they’re undermining everything in one way or another for one process or another. Somewhere we’ve got to get ‘em in check. The impacts are most present here, but really we’re selling off our children’s future for luxury, and it’s insane.

What can we hope for from the Obama administration?
In order to fight this fight you have to be hopeful. You have to move forward knowing that what you’re doing number one is the right thing, and you have to know that there will be an end to it. […] My common sense way of looking at it tells me “Okay, when is enough enough?” I mean, it’s a process that has got to stop, it’s just a matter of how many mountains will be sacrificed before we get it stopped? We will stop it because myself and Judy and so many people and really around the world are literally doing everything they can to stop this process. Unfortunately, very few of them are in Washington, D.C.

Do you have any words of wisdom for us moving forward?
I think our youth is very much a part of our future, and I think it belongs more to them than us […] Educating the youth is critical because they need to […] recognize their consumption and connect it to what’s going on. Beginning this will start in the college and in the schools, as children are growing up.