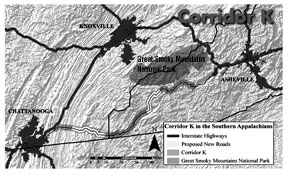 Map of the proposed section of highway by Walter Smith, courtesy of WaysSouth.org.

A proposal for a four-lane highway through the Stecoah Valley drew residents from Graham County, N.C. and surrounding areas to speak out at a packed community center on Oct. 28.

This ten mile, split-median road is being proposed by the North Carolina Department of Transportation (NCDOT) at an estimated budget of $350 million and will fill a gap in “Corridor K,” a number of four and two-lane roads that connect Chattanooga, Tenn. to Asheville, N.C.

Ed Lewis, director of the Human Environment Unit at NCDOT, moderated the hearing. He explained the department’s reasons for proposing the highway, saying “[it] will improve safety and boost economic development for the county.”
The purpose of the hearing was not to decide if the highway should be built, but to determine which of the two routes Lewis presented the public preferred.

Of the 25 people who chose to speak, 23 preferred neither route, and strongly opposed construction of the four lane in favor of improvements to currently inadequate two-lane roads. Many argued that the highway would bypass their businesses, not bring people to them.

Aurelia Stone, general manager of a Best Western hotel in Murphy, N.C., spoke of her experience with a four-lane highway in her town.

“Interstate-style roads bring transient traffic, not people coming to stay and spend money,” Stone said. She added that her hotel has not seen an increase in business from the expansion.

Many who spoke agreed that Graham County’s economy was faltering, but did not see the highway as a viable solution.

“I don’t know if these roads will be built,” said County Commissioner Steve Odom, “but I see more immediate needs, and if the state and federal governments have $350 million to spend, they should look at those needs as well.”

Construction of the highway will displace 35 to 45 homes and business and under “Right-Of-Way” laws, NCDOT will pay for these residents’ moving expenses.

Randy Knight, whose home will lie on the fringe of the new highway, said that he worries his neighbors will be relocated and replaced with noise pollution. “I’m 64 and I don’t want to spend the rest of my days listening to jake brakes and
motorcycles,” Knight said.

Dr. Melanie Mayes, a geology professor at the University of Tennessee, said NCDOT’s Environmental Impact Statement (EIS) “does not include enough geologic study or investigation of hazards.” Mayes said that it contained neither the results of drilling studies in the area nor a geologic map, and expressed concern about this lack of transparency as well as about acid drainage and water pollution which will occur as a result of construction blasting.

Lamar Marshall is working with nonprofit organization WildSouth to map historical Cherokee trails in and around Stecoah Gap. “The EIS contains no archaeological study of the project area and construction could devastate historical artifacts,” Marshall said.

The EIS states “[past studies] and coordination with the USFS suggest that there is a strong probability for archaeological resources associated with the Trail of Tears along the proposed project.”

Hikers often visit the county, which incorporates part of the Nantahala National Forest, to hike the portion of the Appalachian Trail that passes through Stecoah Gap. If the highway is built, a 160 foot cutwall will be visible from the trail. The EIS claims that the wall will be incongruous with the natural terrain and that “at least five view points [from the Appalachian trail] would have unobstructed views of the project.”

The NCDOT will continue to take written public opinion on the proposed road until Dec. 4. Construction of the first half of the project is slated to begin in early 2012. 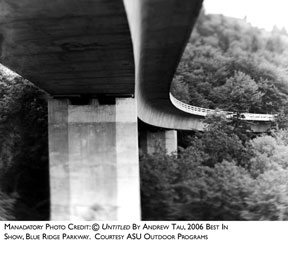 Sponsored by Outdoor Programs at Appalachian State University in Boone, N.C., the competition is divided into seven separate categories, and over $4,000 in cash and prizes will be awarded.

The show will be judged by regional photographers, and finalists will be shown in an exhibition at ASU’s Turchin Center for the Visual Arts Mar. 5 through Jun. 5, 2010.
Deadline for the competition is 5 p.m. on Friday, Jan. 29, 2010. Photographers must be 13 years of age or older to enter.

Please visit www.appmtnphotocomp.org for details or to enter the competition. For more information, call ASU Outdoor Programs at 828-262-4954.

The AMPC is a partnership between Appalachian State University’s Outdoor Programs, The Turchin Center for the Visual Arts and the Blue Ridge Parkway Foundation, and is made possible through the sponsorship of: Virtual Blue Ridge; Appalachian Voices; Bistro Roca, Inventive American Cuisine; Footsloggers Outdoor and Travel Outfitters; Mast General Stores; and Peabody’s Wine and Beer Merchants.

Categories: 2009 - Issue 6 (Dec/January) | Across Appalachia | All Posts | The Appalachian Voice