Six years after private companies set out to build the 303-mile Mountain Valley Pipeline across the mountains, rivers and farmlands of West Virginia and Virginia, the project is billions of dollars over budget and years behind schedule.

And the community-led movement to stop it is bigger and stronger than ever.

Where: 303 miles through West Virginia and Virginia
Diameter: 42 inches
Owner: Mountain Valley Pipeline, LLC. Equitrans Midstream Corp. is the lead developer.
Developers’ Projected Cost and Timeline in 2014: Up to $3.5 billion, complete by late 2019
Developers’ Projected Cost and Timeline as of Spring 2021: Up to $6.2 billion, complete by summer of 2022
Proposed “Southgate” extension: In 2018, MVP announced plans to extend the mainline 70-miles from Virginia into North Carolina. The two projects are inextricably tied together, despite going through separate approval processes.
Missing Permits of MVP and Southgate as of July 2021:

Those fighting to stop the pipeline stand in stark contrast to state and federal regulatory agencies that are supposed to protect communities and the environment, but which instead have assisted the project applicants and disregarded the dire warnings of thousands of community members, geologists, karst specialists, engineers, health professionals, hydrologists and allies who all said there was no way to build MVP without harmful impacts. Moreover, economists early on highlighted evidence that the pipeline is not needed, and that evidence has continued to pile up.

In approving the project, the Virginia Department of Environmental Quality neglected its own mission ”to protect and improve the environment for the well-being of all Virginians.” Since construction of the MVP began in early 2018, at least 350 water quality violations, plus mudslides, rolling equipment, slipped pipe and muddy waterways have resulted.

The project has been wrong at every stage: from planning to construction, to erosion and sediment control attempts, to proper assessment and enforcement of fines. The community, on the other hand, has been right at every stage: raising the alarm, engaging elected officials, sharing knowledge and expertise about the region, alerting regulators, monitoring construction, going to court when necessary, supporting each other and bringing the fight against dirty fossil fuel energy to a broader audience. 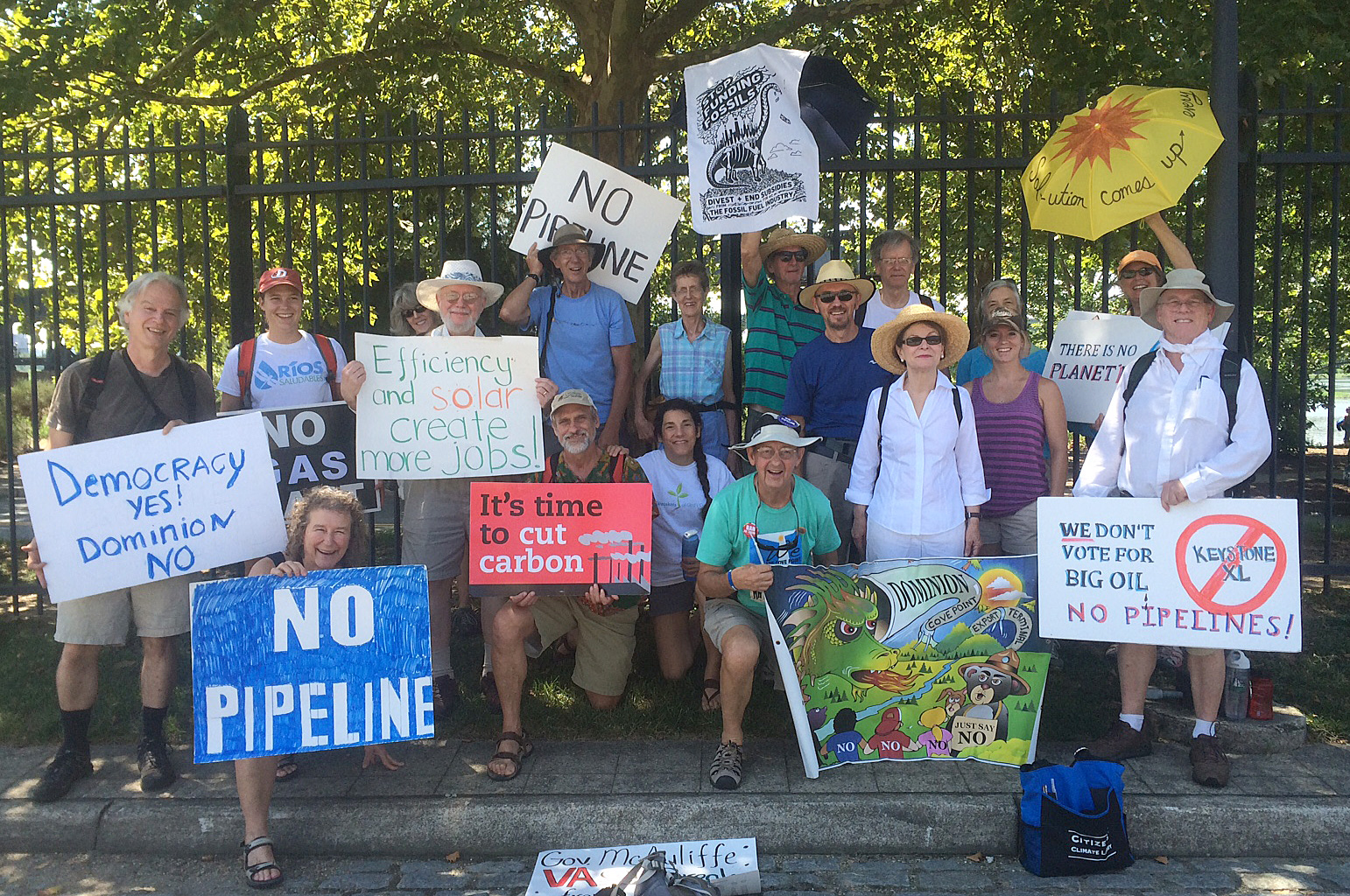 More than 600 people gathered in Richmond, Va., for the “March on the Mansion” to ask the Governor to stand against proposed pipelines in the state.

Communities along the path of the Mountain Valley Pipeline are concerned about every aspect of this unnecessary fracked-gas pipeline.

Climate impacts: Methane is an extremely potent greenhouse gas and exacerbates climate change. Building this pipeline and others would lock the U.S. into decades of dirty energy.

Destruction of natural beauty: MVP would leave a 50-foot-wide strip of permanently cleared land scarring viewsheds along the entire route, including along the Appalachian Trail and Blue Ridge Parkway. It would also cut through about five miles of the Jefferson National Forest.

Explosions: Much of the pipeline is being built on steep, unstable slopes that are susceptible to landslides — which could cause the pipe to rupture. Explosions happened on two separate pipelines in similar terrain in 2018. In April 2020, MVP reported that three sections of laid pipe had shifted due to land movement. MVP’s use of thinner pipe in less-populated areas means the pipe may be more susceptible to the risk of rupture.

Eminent domain for private gain: In typical industry-friendly practice, the Federal Energy Regulatory Commission allowed MVP to seize people’s land all along the route through eminent domain — even before the developer had secured all required permits and without requiring the company to pay people upfront for their land.

When the MVP was announced in 2014, residents along the route swiftly organized, educating themselves on potential impacts and sharing information with each other. They set up meetings and formed community-led groups, which led to the Protect Our Water, Heritage, Rights Coalition. They formed Mountain Valley Watch, a collaboration of volunteers and experts who observe, document and report environmental issues they see during the pipeline’s construction.

Multiple local governments have passed resolutions against the pipeline, and individuals have led and been arrested for protests and tree-sits in and near pipeline construction sites.

In a rush to get this unnecessary project built, developers bulldozed through permit processes from the get-go. Appalachian Voices has partnered with legal teams at Appalachian Mountain Advocates and Sierra Club to challenge MVP’s actions in court to hold it accountable and to stop this ill-conceived, dangerous and unneeded project. 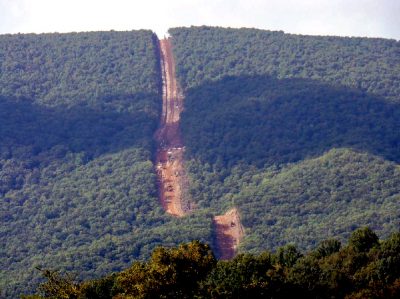 Example of a pipeline right-of-way corridor through the mountains. Photo courtesy of Rick Webb

Work on the pipeline has been off and on for the past several years as opponents have successfully challenged state and federal approvals. In October 2019, as a result of repeated violations by MVP and persistence from opponents, FERC ordered virtually all work to stop along the pipeline in both states. A year later, however, the stop-work order was lifted for all but a few sections.

As of July 2021, a restriction on construction through streams, rivers and wetlands was still in effect due to MVP’s loss of required authorizations in the fall of 2020.

Despite what analysts have long warned is a major overbuild of gas infrastructure, Equitrans Midstream Corp., NextEra Energy, RGC Midstream, LLC and others that make up the Mountain Valley Pipeline, LLC, are trying to build the pipeline as fast as possible.

The economic outlook for new, major fracked-gas infrastructure has shifted from bad to worse in the past five years — not that it was very good to begin with. Many see the demise of the 600-mile proposed Atlantic Coast Pipeline in July 2020 as a predictor for other such projects, including MVP. Between existing infrastructure and the rapid expansion of clean, renewable energy, the purported need for MVP has dried up.

Gas prices continue to fall, which could lead to bankruptcies among drilling companies. What’s more, Duke Energy and Dominion Energy have dropped or delayed plans for new gas-fired power plants — and EQT Corp. is looking to dump part or all of its stake in the pipeline.

Despite the developer’s skewing of facts and repeated claims in the media, the MVP is not a done deal. Far from it.

Countless community groups and allied organizations including Appalachian Voices continue to push back against this fracked-gas boondoggle, and the proposed Southgate extension into North Carolina. Below is a list of some of these organizations and networks. 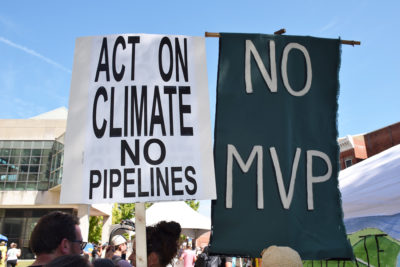