Energy companies and monopoly utilities have foisted natural gas on the American public as a “clean” source of energy. But in reality, it’s an extremely dirty fossil fuel with harmful impacts. The life cycle of fracked gas — from drilling to pipeline construction to burning the gas for energy — creates numerous threats to waterways, public health, communities and the climate.

Appalachian Voices is working to block several proposed gas projects in our region and prevent increased dependence on this dangerous fossil fuel. What is needed instead are major investments in truly clean, environmentally and socially just energy sources. 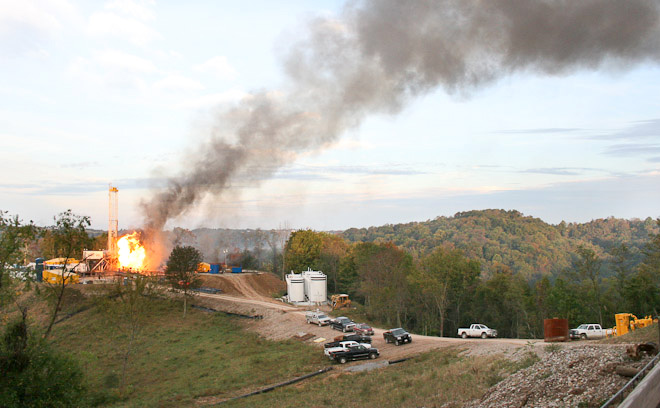 Hydraulic fracturing, or “fracking,” involves drilling deep underground and injecting vast amounts of water mixed with sand and a brew of chemicals to fracture the shale and release the gas. A technique called horizontal drilling enables the industry to angle the deep wells and drill horizontally, sometimes for miles. 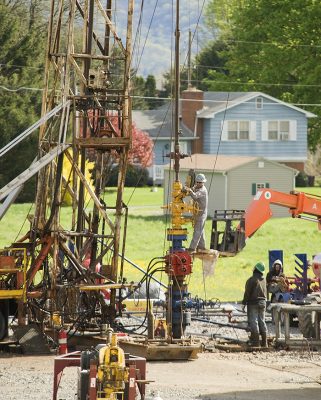 In 2005, Congress passed the Energy Policy Act, which contains a provision — often called the “Halliburton loophole” — that exempts the gas industry from certain requirements of the Safe Drinking Water Act, the Clean Air Act and the Clean Water Act, including having to disclose the dozens of chemicals it uses in the fracking liquid.

The result? The fracking industry grew rapidly for years, including in the Marcellus and Utica shale regions of West Virginia, Pennsylvania, Ohio and New York. Inadequate federal and state oversight fueled the trend.

But the fracking boom has had its setbacks.The number of active drilling rigs in Pennsylvania’s Marcellus shale dropped by half in 2019. Nationwide, the number of rigs dropped by 30 percent from 2018 to 2019.

When the coronavirus pandemic caused oil and gas prices to plummet in early 2020, it worsened financial problems that had already caused more than 200 drillers to declare bankruptcy since 2015. As laid out in an April 2020 report by the Center for International Environmental Law, these issues include:

Even as the industry declines, however, it still has the potential to do lasting damage on a local and global level.

Increasingly, research shows that fracking operations have contaminated or depleted underground sources of drinking water, caused air pollution and triggered earthquakes. Multiple studies have found a strong correlation between fracking sites and deteriorating health among nearby residents. And property values in many communities near fracking sites are taking a hit.

“Living Next to a Natural Gas Well: Part 1” (below), was part of a news story by WDTV reporter Zach Maskell during the height of a fracking operation near Leanne Kiner’s home in Harrison County, West Virginia.

The Push for Unnecessary Pipelines

To transport gas from the fracking regions to other communities and export terminals, companies have sought to build massive interstate gas pipelines hundreds of miles long, threatening communities, wildlife habitat and natural areas in their path. Along with the fracking rush came more than two dozen proposed pipelines to carry the gas to markets all across the East Coast and overseas.

Dominion Energy and Duke Energy’s unnecessary 600-mile Atlantic Coast Pipeline, originally proposed in 2014, was canceled in July 2020. This followed six years of sustained opposition from communities and environmental organizations, including Appalachian Voices, and was compounded by the pipeline’s economic problems and legal hurdles.

The Federal Energy Regulatory Commission has allowed pipeline developers along both routes to seize land through eminent domain and get permits later — a gross misuse of power that not only allows developers to destroy or damage miles of forest and streams but to violate landowners’ rights. Additionally, developers behind the Mountain Valley Pipeline have already racked up hundreds of environmental violations.

A Dangerous Detour from Climate Solutions

While burning gas for electricity has lower carbon dioxide emissions than burning coal, the total climate impacts are still significant. Both the drilling and transportation of fracked gas results in “fugitive emissions” of methane, a greenhouse gas that is 84 times more potent than carbon dioxide in the short term.

While utilities like Duke Energy, Dominion Energy and the Tennessee Valley Authority are slowly moving away from coal in the next 10 to 15 years, they predict that most of that energy production will be replaced with natural gas.

Instead of replacing one polluting fossil fuel with another and worsening the climate crisis, our region and nation needs to commit to a clean energy future.

Learn more about the ongoing fight and get involved