In a monumental victory for the many communities that spent the better part of a decade fighting this fracked-gas monstrosity, Dominion Energy and Duke Energy announced on July 5, 2020 that they were scrapping plans for the Atlantic Coast Pipeline.

Fast Facts at Time of Cancellation

Appalachian Voices extends a heartfelt congratulations and thank you to our partners and to the hundreds of people who worked tirelessly for six long years to keep pushing for this victory!!

The six-year fight against the Atlantic Coast Pipeline was very much an uphill battle. Dominion Energy and Duke Energy, two of the largest monopoly utilities in the country, had more than a dozen state and federal agencies on their side. Even with the full weight of President Trump’s overzealous fossil fuel deregulation agenda behind the pipeline, all of us joining forces together stopped it from being built.

Residents of North Carolina, Virginia and West Virginia collaborated across state lines to put a end to this fracked-gas boondoggle, holding marches, attending public meetings, monitoring construction and more. They formed grassroots groups like the Friends of Buckingham, which fought the construction of a massive gas compressor station in the historic Black community of Union Hill, Virginia.

From Robeson County, North Carolina, to Harrison County West Virginia, in statehouses and courthouses, communities stood shoulder to shoulder to protect their land, their water and their communities. Every public comment, every documented water quality violation, every phone call to a legislator or regulator, and every conversation between neighbors contributed to this momentous win. 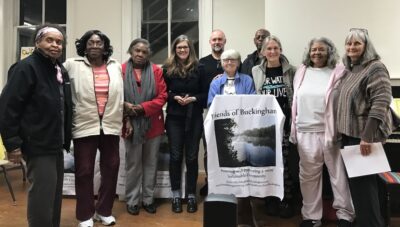 “I feel that all the hard work that all of us have done was finally for good,” said Ella Rose with Friends of Buckingham (pictured above second from left) in a statement. “I feel like I have my life back. I can now sleep better without the worries that threatened my life for so long.”

“The Atlantic Coast Pipeline was a climate catastrophe and economic boondoggle from the start,” said Appalachian Voices Executive Director Tom Cormons. “The smart investment today is in the people of Central and Southern Appalachia. Not in the resources that might be extracted and exported, but in projects that generate local wealth, healthy communities and clean, sustainable energy. We are hopeful that this momentous victory is merely a tipping point as our society pivots towards a clean energy economy that works for all people.”

Construction on the Atlantic Coast Pipeline had been halted since late 2018 after courts struck down several permits. Although Duke and Dominion won a U.S. Supreme Court battle in June 2020 that would have allowed them to tunnel under the Appalachian Trail, it was not enough to turn the tide on their flailing project.

The pipeline’s outlook further worsened in spring 2020 when the Virginia General Assembly passed two bills that posed significant obstacles for lead developer Dominion Energy to justify the Atlantic Coast Pipeline, or any major new gas infrastructure, to state regulators. One bill required that all of Dominion’s carbon-emitting power plants close by 2045, and the other required that utilities prove to state regulators that a proposed pipeline is both necessary to meet electricity demand and would be the cheapest energy option before charging ratepayers for the project.

On the legal front, Appalachian Voices and our partners challenged Duke and Dominion’s mad dash to rush their permits through the regulatory system. The many lawsuits against developers’ flawed permits significantly contributed to the delay and ultimately to the win against the Atlantic Coast Pipeline.

When the Atlantic Coast Pipeline was announced in 2014, the economic landscape for natural gas was vastly different. In the years that this project lumbered along, supply dwarfed domestic and international demand.

Days before canceling the pipeline, Dominion insisted the ACP would be operational by 2022. From the project’s inception, economic experts were signaling caution about an overbuild of natural gas infrastructure, noting that existing pipelines would be sufficient, with some minor upgrades. And even Dominion Energy had canceled plans for new gas units that it claimed would be served by the ACP.

Communities in and near the path of the Atlantic Coast Pipeline had a wide variety of concerns that come with the threat of living by a massive fracked-gas pipeline.

Damage to the environment: Imagine the trees and wildlife habitat lost from gouging a 600-mile long, 125-foot wide swath through Appalachia. Then there’s the massive erosion and sediment pollution to our waterways, and the potential to diminish groundwater supplies and run residential wells dry.

Climate impacts: North Carolina’s and Virginia’s governors both committed to clean energy goals that would be impossible to achieve if this pipeline was built, as it would have further committed the region to decades of fossil fuel consumption. One report found that the ACP would have led to climate pollution equivalent to 20 coal-fired power plants.

Explosions: Much of the pipeline was going to be built on steep, unstable slopes that are susceptible to landslides, increasing the risk of a pipe rupture. Explosions happened on two separate pipelines in similar terrain in 2018.

Eminent domain for private gain: The Federal Energy Regulatory Commission allowed ACP to seize land from individuals, families and businesses all along the route through eminent domain, even before the pipeline had secured all required permits. ACP developers did not have to pay people upfront for use of their land.

Environmental justice: The Atlantic Coast Pipeline would have disproportionately impacted low-income communities, communities of color, and Native American communities. These communities include: 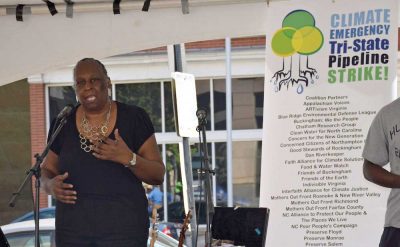 Thanks to all for a hard-fought victory!

This landmark victory would not have been possible without the hard work of countless community activists and organizations, including the Southern Environmental Law Center, Friends of Buckingham, Alliance for the Shenandoah Valley and the many other local, state and national organizations that are members of the Allegheny-Blue Ridge Alliance.