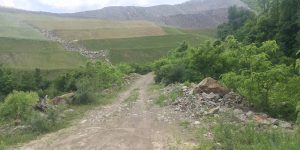 This reclaimed mine site across the street from William’s Bishop Ranch holler home is no longer the forested mountain he explored in his youth. Photos by William Dixon

William Dixon takes a short break during our conversation to ring up a customer in his international grocery store located in Beckley, W.Va. “If she’s Ethiopian, she’ll like this one…tell her it’s Egyptian style,” he tells a patron who is shopping for his girlfriend.

Taya and Abraham’s International Grocery is unique in a town with just over 17,000 people. And so is William, who opened the store in 2009 with his wife Dipinti, and has distributed The Appalachian Voice there for the past three years. The native West Virginian has lived his whole life in a nearby holler that has been home to his family for generations.

The holler, known by locals as Bishop Ranch, is located in the heart of coal country—halfway between Beckley and Charleston. William was an adolescent when mountaintop removal coal mining became the primary means of extracting coal in the area. Now 31 years old, he has a front row seat in the theater of destruction that surrounds his home.

“You grow attached to the landscape when you’re growing up, it becomes a part of who you are,” William says, “And when you see this type of change, it does something to you.” 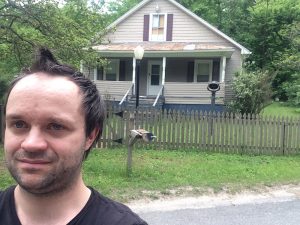 William admits that he didn’t become an activist until his early twenties, when he suddenly realized that the mountain he climbed as a teenager was altered permanently, its peak blown up and flattened. “This is something that took millions of years to form, and now it’s gone forever,” he comments.

Although the destruction William has witnessed over the past two decades is nothing short of tragic, he still has hope for the future and refuses to leave the holler where he was raised. The eternal optimist, he suggests that the flattened, treeless mountaintops would make perfect sites for wind farms.

“I ask myself how bad are things going to get before they get better,” William says. “[But] I gotta keep that hope inside of me that things will get better. We gotta keep that little bit of hope, although things seem to get worse and worse.”

William believes that the only real solution to the problems created by mountaintop removal would be to move away from coal as an energy source, and he suggests that before we can complete that transition, we have to quit referring to coal as “cheap energy.”