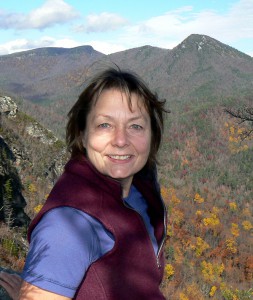 Susan Hazlewood is an avid hiker, and she brings her conservation ethos to her volunteer work with Appalachian Voices, Elk Knob Community Heritage Organization, Friends of High Country State Parks and the Community Care Clinic.

Susan Hazlewood has lived all over the country, from Florida to New England. She spent a season as an interpretive park ranger in Vermont, and, living near Nashville, Tenn., has witnessed urban sprawl sweep up historic homes and rural retreats.

She originally hails from southwest Virginia, and the mountains of Appalachia have always beckoned. When she finally did settle down in Boone, N.C., a new calling came for Susan: an inspiration to give back to her natural roots by helping to preserve them.

Rising steadily from old country roads and hilly farmland, Elk Knob State Park offers an almost 360-degree view stretching from Virginia to Tennessee. Land once purchased and saved from development by The Nature Conservancy in 2003 and then deeded to North Carolina’s Division of Parks and Recreation, it is one of the newest parks in the state and protects one of the tallest peaks in the region.

Susan has been a major player in the massive amount of volunteer trail work needed to make the state park what it is today — over 6,000 volunteer hours total — and currently serves on the board for the Elk Knob Community Heritage Organization. This community-led nonprofit focuses on resource protection and the historical preservation of the area.

Susan’s appreciation for land conservation has spurred her volunteerism, she says, “especially in the mountains.”

In Woodstock, Vt., where Susan was an interpretive park ranger, she experienced how overdevelopment was causing the cost of living to skyrocket with greater property and land taxes. 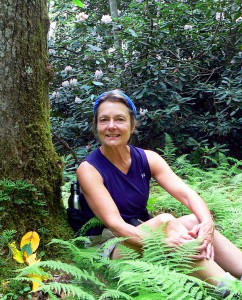 “Vermonters were having to leave their state,” she says. “This is when I first started paying attention to development issues. It can be bad for our water sources and cause flooding and erosion, too.”

Today, Susan worries about her hometown of Martinsville, Va., and its high unemployment. As mills and factories were swept out with the country’s manufacturing, this small town in Appalachia felt the impact. Change and progress in communities can be good things but rampant development, she says, is all about the money.

Susan was living in Boone, N.C., in the 1970s and remembers it still having a small town feel. “The New Market Center was once a farm with white buildings and cows,” she says, referring to what is now a strip mall off of the highway coming into town. The brick silo currently in the parking lot, she says, was from the original farm.

“It’s an ethical issue for property owners who have to ask themselves ‘Do I sell or not sell?’” Sometimes owners don’t wish to see their land handed over to developers, but then often they can’t afford not to sell, adds Susan, who believes land conservation is ultimately the best route to take.

Besides her role on the board of the Elk Knob Community Heritage Organization, Susan helps out at the annual Elk Knob festival and is a member of the Friends of High Country State Parks, an organization focused on raising money for and protecting Mt. Jefferson, Elk Knob and Grandfather Mountain state parks. She also lends her hand at the Community Care Clinic, a health care provider for those without insurance in Watauga County.

Susan first came to Appalachian Voices to volunteer in 2005. “Seeing all the development issues after I came back to Boone, I didn’t know what to do, so I knocked on [the office] and asked how I could help.” Eventually she took on the role of restocking issues of The Appalachian Voice for the Asheville, N.C., area, a task she says is always a thrill due to her enjoyment of visiting the city.

Susan currently lives in Boone with her dog and trail mate Leiomi.