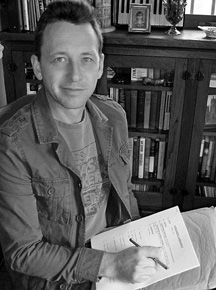 Award-winning writer Silas House was born and raised in Appalachia, in the rural mountains of Kentucky. He drew from his childhood memories of Laurel and Leslie counties for the basis of his first three novels, and has composed press kits for some of Nashville’s top musical artists. Among his other accomplishments, Silas created the Mountain Heritage Literary Festival, served as the NEH Chair in Appalachian Studies at Berea College, acted as contributing editor for No Depression magazine, and was chosen as Appalachian Writer of the Year by Shepherd University in 2010.

In his “free” time, Silas also serves on the board of directors for Appalachian Voices, and it is in his activism where his love of Appalachia truly shines. We caught up with Silas to talk to him about his work to stop mountaintop removal coal mining and protect the mountains of Appalachia, and here is what he had to say:

What makes you an Appalachian?
I think what makes a person Appalachian is if they care about this place, if they work to preserve and protect it, if they strive to understand it in all of its complexities. I was born and raised here and I believe the mountains and their people are in my bones and blood. But I also know plenty of people who are not from here originally but care deeply about the place and work hard for it … I’d call them Appalachians, too.

What inspires you to protect the region and be an advocate?
One of the main tenants of being an Appalachian is preservation. We like to preserve everything: stories, quilts, photographs, relationships … even our food, since we take such great pride in canning and such. Appalachians have been told for over a hundred years now that we’re “a vanishing people” or “a disappearing culture.” So I think that makes us hold on with white knuckles. I think being told that we are fading away as a culture compels us to preserve as much as we can.

So it seems only natural to me that we preserve that most obvious of things: the land, particularly the mountains with which we identify so strongly. I’ve heard people say, “We will tear down these mountains to be able to stay in them.” That logic is so foolish. So if we are going to call ourselves Appalachians then we must preserve the Appalachian mountains. Without them, we WILL vanish.

What do you love about being part of the AV family?
I love being part of an organization that is really and truly doing something every single day to save this land and its people. I am incredibly proud to be a part of the AV family and I tell everyone I can about the great work AV is doing throughout the region and the country. I know of no other group so committed to this fight and I think that AV really understands the region in a way few others do, especially the aspects of preservation in all of its forms, whether that be its mountains or its literature or its dialect.