Poet & Activist: A Cabin at the End of the Whirled

With heroes such as the activist playwright and poet Jim Webb, a longtime opponent of surface mining, and the late Bob Gates, a West Virginia filmmaker and photographer whose pioneering work exposed the practice, it’s no surprise that Scott Goebel has a deep affinity for mountain culture. But he didn’t always have such a strong sense of Appalachian identity and pride. In his mid-30s, he connected with writer Richard Hague in Cincinnati. Hague, who would become a mentor and friend, introduced Scott to the Southern Appalachian Writers Cooperative. “More importantly,” Scott says, “he introduced me to Appalachia.” 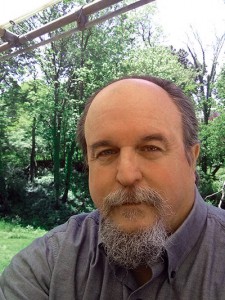 Despite visiting family in Eastern Kentucky since childhood, it was through SAWC that Scott embraced the region’s rich culture and his connections to Appalachia. While attending Appalshop’s Seedtime on the Cumberland Festival, he discovered the beauty of area and started a friendship with fellow writer Jim Webb, who runs Wiley’s Last Resort, a private campground near Whitesburg.

Shortly after Webb had relocated his family’s ancestral cabin to his campground, the pair discussed building a writers retreat. Scott knew how to design and build the space, however, it took time to settle on a location and secure funding. They wanted the cabin to be “off the grid” and have “enough room for one or two folks to write or relax.” The structure’s name pays tribute to Jim Webb’s play of the same name, which confronts strip-mining and political corruption in West Virginia. Scott says, “We had the name — Elmo’s Haven — for three years before we had three nickels.”

Scott kicked off the funding efforts by selling his 1975 Triumph TR6 — “a remnant of my bachelor days,” he writes — and received financial and labor help from friends and SAWC members. Completed in 2013, Elmo’s Haven is part of Wiley’s Last Resort and a short hike from the Bad Branch State Nature Preserve. The cabin is sealed from the elements and is heated for year-round use. It has solar electricity, a composting toilet, and a serious collection of Appalachian literature. While the campground has a shower, Scott hopes to raise funds for solar shower at the cabin. 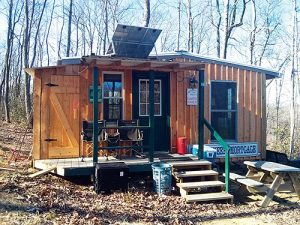 Scott Goebel refers to the Elmo’s Haven retreat as a “cabin at the end of the whirled.”

What started as a “writers’ cabin” has evolved into a retreat space for anyone who needs some quiet time to themselves. In the past year activists, musicians and writers have spent time there. Scott manages Elmo’s Haven through The Bad Branch Institute, a volunteer-run nonprofit that promotes sustainability and cultural understanding.

He also furthers understanding in person by visiting classrooms and community groups to present information about mountaintop removal coal mining. When he began presentations in the Cincinnati area a couple of years ago, people were not familiar with the term “mountaintop removal.” Now, his audiences seem more aware of the phrase.

“By offering a balanced presentation and avoiding polarizing language, people seem receptive to learning more about [mountaintop removal],” he wrote in an email. “I try to help folks understand their connections to mountaintop removal and the struggle against entrenched power.”

“I’m less a treehugger than I am a people hugger,” Scott notes. “As another of my heroes, Wendell Berry, has said, ‘What we do to the land, we do to the people.’”

A resident of northern Kentucky, Scott is a writer and has edited the literary journals Red Crow and Pine Mountain Sand & Gravel, as well as Jim Webb’s “Get In, Jesus–New & Selected Poems,” published in 2013.

Scott has been a volunteer distributor of The Appalachian Voice for about two years. He is active with the Urban Appalachian Council, Southern Appalachian Writers Cooperative, and Kentuckians For The Commonwealth. His KFTC chapter helps distribute to county libraries in Kentucky’s Boone, Kenton and Campbell Counties.