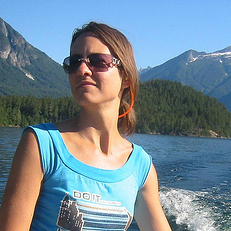 In 2006, a peculiar sight could be seen floating on the Duwamish River. An old industrial barge, carrying not goods nor machinery, but rather, a morass of plant life native to Seattle’s major river, was led around for a month, a microcosm adrift on the waters where shores were once teeming with the same greenery.

“The Living Barge” it was dubbed, a project by collaborative public-space artist and Appalachian Voices member Sarah Kavage. Among the project goals was to highlight the oft-forgotten amenities of a river, especially its ecology that is frequently endangered in industrial areas. “The Duwamish is what I’d call a ‘working river,’” says Sarah, noting its close proximity to mills and factories, and the corresponding pollution of chemical waste.

Sarah experienced the devastation of river systems from a young age. Her mother grew up in Cass, West Virginia, and much of Sarah’s childhood was spent at a girls’ summer camp near parts of Jefferson National Forest. For eleven summers — five as a camper and later six as a counselor — she learned to love the mountains at “Camp Appalachia” in Alleghany County, Va., where she and her friends would “go all over,” hiking hills and swimming in the nearby river.

Downstream from the camp, however, was a paper mill that polluted the river. Seeing the devastation of the river firsthand heavily impacted Sarah. “Such an idyllic site being destroyed was sad and disturbing.” Yet, she says, through this experience she learned a lot about the people and the region, as well as the forces that threatened them.

Sarah became a member of Appalachian Voices once she learned about the devastation caused by mountaintop removal coal mining. “What this organization and its allies have done is incredible, getting a diverse coalition of people interested,” she says. While it’s important work, she recognizes there’s a lot going against conservation, and on top of that, still so much more to be done—whether it’s in Appalachia or other regions across the country.

Another of Sarah’s projects includes creating would-be waterlines in a post-climate change Seattle in 2007. With her background in urban planning, Sarah is fascinated by how the project elicited strong emotional responses from its citizens, challenging them to see their public space as a living, vulnerable thing.

“A good emotional connection has to be made since decisions on how to take action are usually emotional, not logical.”

If the Duwamish River is any sign of what’s to come though, we can expect good things, she says. “We were turning our backs on rivers, but now you see people returning to them.”

Sarah has lived in Seattle for fifteen years and continues to plan art projects to challenge the urban public sphere. For her next endeavor, she hopes to return to the Duwamish.

To learn more about Sarah Kavage’s projects, visit her website.