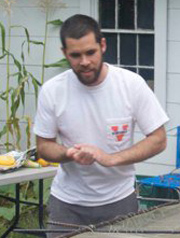 Michael Elchinger learned about mountaintop removal coal mining early on in his quest to make a difference in the energy sector. He received his undergraduate degree from the University of Virginia, but it wasn’t until he was pursuing dual masters degrees in business and natural resources and environment at the University of Michigan that he read an article about mountaintop removal.

“I was bitter that businesses could hide something so hideous and consumers could be so uninformed and disengaged,” says Michael. “And even if [consumers] did know – they wouldn’t, maybe couldn’t, care.”

Soon he became acquainted with the work of Appalachian Voices through the organization’s Global Awareness layer in Google Earth, and was galvanized into action. He sported the I Love Mountains sticker on his laptop, hosted screenings of documentaries such as “The Last Mountain,” kept tabs on the website and subscribed to the e-mail notices while he was formulating a “plan to pursue a career geared toward a transformation to a more sustainable energy system.”

When a pig roast that he and three of his friends hold annually for their department morphed into a charity fundraiser — with each friend picking a charity and partygoers “voting” for their favorite by putting money into a jar — Michael’s charity, Appalachian Voices, won.

“I could think of no better organization to support, and more importantly, no better way to increase awareness,” he says.
Thanks to Michael, his friends, and some folks at a pig roast, more than $1,000 was raised for our work to stop mountaintop removal.

“Though my friends in the School of Natural Resources and Environment might feel that business has no part in the solution, that is where I felt I could be effective and also where most of the impact is,” Michael explains. “I also believe that activism and awareness is another powerful tool for change, so I choose to put my talents where they are best spent and give when I can to organizations that match my beliefs and are effective in their cause.”