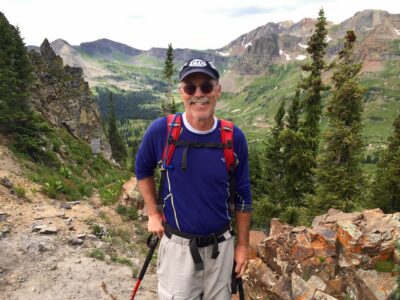 Tom is happily married to his wife, Carol, of 40 years, and has been living in Virginia for 30 of those.“We certainly enjoy life in Central Virginia — I mean the weather’s good, it’s great for getting outdoors, which we both like to do a lot,” Tom says.

Tom hopes that Appalachia maintains its rural character. “For something on the East Coast, it’s remarkably rural once you get away from the big cities, so I would like to see that retained,” he says. At the same time, he acknowledges that people in the region need jobs, and hopes that clean industries would provide those opportunities in contrast to the history of fossil fuels in Appalachia.

Tom is a retired commodity trader and has spent the last few decades maintaining an abundant schedule of volunteering in and around Charlottesville, Va. When one of his three sons was looking for a community service opportunity, Tom suggested adopting a trail in Shenandoah National Park.

“We adopted a trail in the late ‘90s and he helped me for a couple years,” says Tom. “Then my second son helped me maybe a year, then it was mine,” he laughs. “I’ve kept at it and I enjoy going up there and working on the trail all seasons of the year. It’s a great way to get outdoors and do some good.”

For about 15 years, Tom has also helped maintain a trail for The Nature Conservancy in Nelson County, Va. He has also helped coach and fundraise for the men’s club crew team at the University of Virginia for the last 30 years. In addition to his other commitments, Tom teaches physical education at Free Union County School, a small private elementary school in Albemarle County, Va., where his three sons attended.

Tom also volunteers to distribute 1,100 copies of The Appalachian Voice around Charlottesville, Va., which he has been doing for the last three years. He says that the part of the publication that sticks out to him is “mostly about people and how they’re helping the community.”