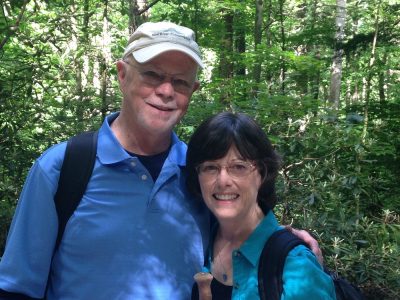 Russ Moxley is always thinking of ways the land and water around him can be best managed and cared for. A Tennessee native who currently lives in Western North Carolina with his wife Jean, Russ joined Appalachian Voices’ Board of Directors in 2020.

Although he is a new face on the board, Russ has been following Appalachian Voices’ efforts since learning of the organization while at a festival in Todd, North Carolina, about 10 years ago. Both Russ and Jean consider themselves environmentalists and seek opportunities to get out into nature, surrounded by trees, whenever possible.

Russ states that he used to have a trailer out on Belews Lake in Stokes County, North Carolina, adjacent to Duke Energy’s largest unlined coal ash pit in the state. Russ understood the need for coal ash cleanup in Stokes County and the harms caused by the 2008 Kingston coal ash spill in eastern Tennessee, near where he grew up. These two cases led to him becoming especially concerned with coal ash removal.

When asked what drew him to Appalachian Voices, Russ attributed it to the organization’s strategy for addressing environmental and energy issues within the region. He spoke about the significant role Appalachian Voices played in the cleanup of coal ash pits as an example of this forward-thinking mindset.

At the start of 2020, Duke reached a settlement with North Carolina to excavate nearly 80 million tons of coal ash at six of the utility’s coal-fired power plants in the state including the Belews Creek Power Station. The settlement resulted from a lawsuit filed by nonprofit law firm Southern Environmental Law Center on behalf of Appalachian Voices and several other organizations.

“When I moved [to Asheville from Greensboro], I became aware of the work Appalachian Voices was doing with several other conservancy groups to work with Duke Energy to make sure they cleaned up their coal ash,” Russ says. “So I have followed that issue through the years.”

Russ is no stranger to taking on leadership roles in environmental advocacy work, having first gained professional experience in the field through the New River Conservancy — a regional organization committed to protecting the New River watershed and its inhabitants. He first connected with the group when he contacted them about riverbank protection concerns on his and his wife’s property, and the conservancy advised planting silky dogwoods by the river. This led to further collaboration with the organization, eventually resulting in an invitation for Russ to serve on the board. Russ was chair of the board from 2012 to 2017, and focused on environmental improvements surrounding the New River.

“Because of the long work I did with the New River Conservancy, where we were trying to protect the water, the woodlands, the wildlife of the New River, I’ve had a long and deep involvement with concern for water and water quality,” Russ says.

Since moving to Asheville, he has become interested in improving and protecting the water of the French Broad River. To Russ, maintaining healthy water quality aligns with a treasured pastime: kayaking on the river.

“There are some times that we get on the river or trail and I just have this feeling of being at one with the river,” says Russ. “I just have this real sense of wholeness and peacefulness – it doesn’t happen all of the time, but when it happens it’s really a special feeling.”

Jean Moxley has taken up contemplative photography recently, an activity Russ says has been a wonderful experience to share during a hike.

“I’m learning from her as we hike, because she finds a spot where she wants to quietly sit, paying attention to all the sights and sounds, and then she will zero in and start taking pictures,” says Russ.

Jean’s nature photography is on display at the North Carolina Arboretum in Asheville through May 2, 2021.

When not paddling the river or walking a trail, Russ enjoys getting to know the character of neighboring communities. Prior to the COVID-19 pandemic, he and Jean frequented local events such as apple picking and music festivals.

Contributing his environmental wisdom from his practices and pastimes, Russ says that he is ready to dig deeper with Appalachian Voices and help maintain the momentum that the organization has built for itself.