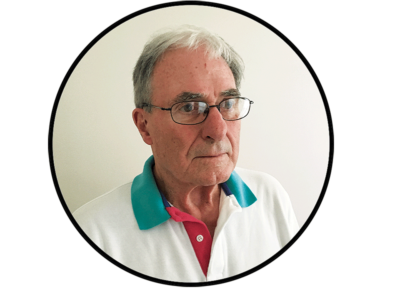 Marion Loper, a volunteer distributor for The Appalachian Voice, retired from a 29-year media career in 1999 and then worked in media sales and marketing. Before settling in Knoxville in 2008, he moved around the country a lot for work — but always found himself in metropolitan areas.

Marion had a long-standing interest in protecting the environment, and would almost always belong to a chapter of the Sierra Club wherever he resided. In Pittsburgh, he participated in the creation of a Braille trail for blind children and also served as a trail guide.

“They cut out a trail in one of the large city parks for blind children, and we would take them up there and take them through so they could smell and hear the city park,” Marion recalls.
He says he understands the complexities of environmental issues because his father worked in the oil business and he grew up unaware of the impact of fossil fuel extraction on the natural world. But after seeing the damage caused by coal mines in Pennsylvania, Marion became even more convinced of the need for new sources of energy. According to Marion, the time for coal-sourced energy has come and gone and coal needs to be replaced with more sustainable alternatives like solar power.

About three years ago, Marion decided to get more involved in environmental and social activism. He became a member of the American Indian Museum wing of the Smithsonian, the Tribal Council of Native Education, and Save the Whales — but he still felt the need to be doing more. Then, he came into contact with Appalachian Voices.

Marion is now entering his second year of distributing The Appalachian Voice. He says he realized that helping to distribute the publication was something that he knew how to do and was capable of helping with. He seeks out locations in Knoxville where he feels the paper would be a good fit and has formed relationships with at least 20 locations.

“I feel that the paper is doing a good job of monitoring and reporting the information and putting it out in front of the general public so that they can make an informed decision as to what they want to do moving forward,” says Marion.

For Marion, one of those most rewarding elements of being a distributor is getting to meet all kinds of people who are passionate about the environment.

“I was tickled to meet these unique people, and that’s kind of what I was looking for and I feel good about distributing the paper,” Marion says. “It gets me out, it takes care of boredom, it’s a feel-good. And I know that your message is good and accurate and needed.”