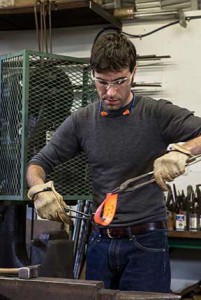 In 2006, Marc Maiorana, a blacksmith by trade, moved from New Jersey to Russell County, Va., and found himself in new territory. Russell County sits in the southwestern tip of the state, right on the slopes and hills of the Blue Ridge — a bit different from Sussex County, N.J.

Marc was eager to get to know his new home. “I like being nosy when it comes to a new place,” he says, and so immediately he began to explore. He went to the satellite images of Google Maps to get a better view of the county, but at first was a bit confused by what he saw.

“I saw the lakes and mountains,” he says, “but then there were what looked like clouds covering parts of the view.” Marc quickly discovered that what he thought was stray cloud coverage was actually something much more troubling. “What I was looking at were strip mining pits,” he says (from a bird’s-eye view, used mining sites can look like dark-to-light gray splotches — hence, “clouds”).

Suddenly, Marc’s perspective of the region changed: “I came to realize that there was this whole other force at work.” Marc was interested in learning more about the environmental issues around him and sought a medium by which he could gain a broader perspective.

Soon Marc became a member, a role he has fulfilled beyond the call of duty over the past few years. Early on in his membership, Marc got a call from Kara Dodson, a regular summer intern here at Appalachian Voices. “Kara took me to task,” he says, asking him to help out with water testing in his community. “It got me outside and I was more than happy to help.”

They ventured with a water watch team to the Pinnacle Natural Area Preserve, a locale Marc knew about but never visited before, and tested the water in and around Swords Creek for toxic pollutants. He learned the ins and outs of testing water sources as well as “the good and the bad” to be found in the results, he says, all the more relevant due to the presence of local strip mines. Indeed, some of the data Kara and the team compiled showed a breaching of Clean Water Act standards. 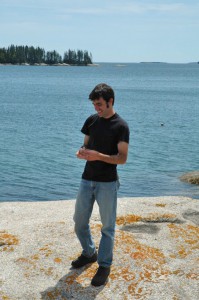 Now Marc says he “fully supports the water watch issue,” and has recently worked with our own Erin Savage in testing even more water sources in Russell County.

When Marc isn’t helping us out with water testing in Virginia, he’s running his own smithy, Iron Design Company. Located in Cedar Bluff, Va., the company focuses on sculptural and architectural-based design to create “heirloom-like quality” products, while also doing more limited production work. Marc’s talents as a blacksmith have won him a number of art awards, and the Smithsonian American Art Museum’s Renwick Gallery has permanently acquired some of his ironwork.

Marc lives with his partner, Robyn, near Belfast, Va., though the couple is in the process of moving south to Abingdon.