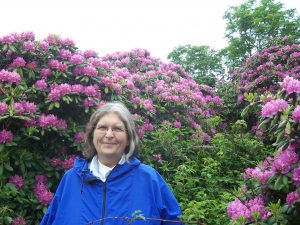 Lyn Hartman, inspired by the people and environment of the region, is a social worker in six counties in Eastern Tennessee.

Mooresburg sits nestled in a valley of the Clinch Mountain Range in Hawkins County, Tennessee. Here Lyn Hartman lives near her hometown, a place and region she has grown close to over the years.

“I’ve had a spiritual connection to the mountains as long as I can remember,” she says. “There is a sense of renewal and sustenance here.”

In her thirty-five years of social work in East Tennessee, Lyn has seen the healing properties of her natural surroundings first hand. Following in the footsteps of her mother — a well-respected social worker in her own time — Lyn visits families with children who have disabilities in order to help parents better understand their child’s medical and developmental issues and to help address their concerns and priorities.

“It’s a very meaningful job, but it is sometimes emotionally difficult,” she says. Now Lyn serves a six-county area in her practice and says she is very thankful to have such rewarding work in such a beautiful geographical area. She says she learns something new from the families she meets and that each day is different and interesting.

“There is just a generosity of spirit here,” she says, pointing to the region’s mountains and people as Appalachia’s greatest representation. “There are so many here who embrace their identity with pride and courage, despite sometimes having to deal with negative stereotypes and outside derision.”

Protecting the region is more on Lyn’s mind than ever these days. The tallest mountain in Mooresburg, known as Short Mountain, is being aggressively mined for silica. “A very large area has been removed, and the destruction can be seen from parts of Morristown, Rutledge, and Thorn Hill,” she says. Numerous eighteen-wheelers can be seen every day exporting the extracted silica, which Lyn fears may be used for fracking.

“Seeing the damage to the mountain just breaks my heart. Several years ago, a very wise woman from this community said, ‘Home isn’t home anymore.’ I now know what those words really mean.”

While aspects of her natural home are being irrevocably altered, Lyn also sees ways in which the region and its treasures will endure,

In addition to the mountains themselves and their people, she has a great interest in the rich literature and music from or inspired by the area, as well as nature writing.

One of her favorite lines comes from Walt Whitman, a man who often celebrated the everyday wonders of the natural world. In the preface of Leaves of Grass, Whitman says, “Love the earth and sun and the animals.” In everything she does, Lyn says, she tries to keep those words in mind.

Her deep love for animals has led her to work as a volunteer for animal rescue groups and to write grant applications in order to fund spay and neuter clinics. She has also written articles for Critter magazine. In her spare time Lyn enjoys visiting the mountains, reading, spending time with friends, and going on walks with her dogs.