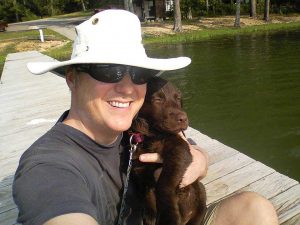 Kevin Price says his company’s slogan is “coffee with a soul.” It could not be a better fit — most of all for the soul he puts into his small coffee business.

“Blue Smoke has always been about making a difference,” Kevin says. “It has given me a platform to promote and make people aware of different things I’m passionate about.”

Based in southern Appalachia, Blue Smoke Coffee comes from humble beginnings. About a decade ago, Kevin began roasting coffee beans in an iron skillet in a Smoky Mountains cabin. As he fine-tuned his process, he started sharing his roast with friends and discovered a passion for hand-roasted coffee along the way. Soon, that passion became a business philosophy, and Kevin created a community around quality coffee and important causes.

In addition to being a committed member, supporter and friend of Appalachian Voices, Kevin advertises in The Appalachian Voice and distributes 2,000 copies of the paper to Asheville, Chattanooga, Gatlinburg and everywhere else Blue Smoke Coffee goes. Order a bag of coffee online and you might find yourself perusing The Voice while you brew your first cup of Blue Smoke.

Many people recall the first time they learned about Appalachian Voices or flipped through a copy of The Voice — an experience that frequently occurs in a local coffeehouse. A longtime reader turned distributor, Kevin can’t quite remember when he first picked up the paper. That’s how far back his ties to Appalachian Voices go.

“Kevin has been one of our most stalwart supporters throughout the history of The Voice,” says Jamie Goodman, editor of the publication. “He is a person who really lives what he preaches — supporting organic and fair trade practices, speaking out against mountaintop removal, and advocating for so many other causes — and that is truly inspirational.”

Although no longer roasted in an iron skillet, each batch of Blue Smoke nevertheless has character and Kevin’s personal touch. He still hand-roasts Blue Smoke specialty blends by the pound, using solar-heated water and purchasing clean energy to power his roastery, before packing it up in biodegradable bags and recycled boxes and hopping on a bike or in his hybrid for delivery. And today, Kevin’s conscientious business philosophy has paid off for the organizations he supports while building a devoted, regionally concentrated customer base. 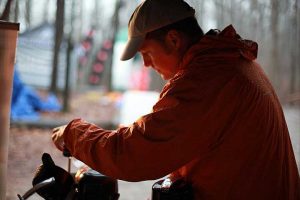 Kevin donates 10 percent of Blue Smoke’s sales — that’s sales, not just profits — to Appalachian Voices and other environmental and humanitarian nonprofits. The long list of testimonials on the Blue Smoke website is full of kind words praising Kevin and his coffee. One happy customer from Florida describes Kevin as “a master alchemist saving the world one-pound-of-the-best-coffee-you-have-ever-had at a time!” Another from Alabama calls Blue Smoke “a real American business model in action.”

Many half-jokingly claim coffee is something they cannot live without. But Kevin knows that for some Appalachian communities even truly vital resources like breathable air and drinkable water are at risk. And he believes businesses have a responsibility to encourage more conscious consumers.

“We know we have the ability to destroy this planet,” he says. “But to a lot of people it’s invisible. They don’t think about environmental problems impacting their lives.”

When distributing The Voice to coffee shops around southern Appalachia, Kevin notices the issues that leave the newsstands empty usually have beautiful covers featuring scenes of Appalachian wilderness and wildlife, even when stories of environmental destruction and injustice are covered prominently inside. Blue Smoke, he says, employs a similar strategy.

“I hook them with the coffee.”