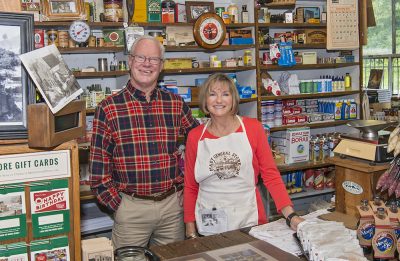 The Coopers at the original Mast General Store in Valle Crucis, N.C.

Today, John and Faye Cooper are well known in the northwestern North Carolina High Country as the owners of the renowned Mast General Store, steadfast supporters of regional organizations and friendly community members. But when the couple moved to Watauga County in the spring of 1980 with their two children, they were newcomers taking a leap of faith.

A year earlier, while visiting the small community of Valle Crucis, N.C., the shuttered Mast General Store building caught John’s eye. Continually in operation since 1883, the general store had closed its doors in the fall of 1977. John was intrigued, and before long the Coopers had sold their Florida home, purchased the building and set up an apartment above the store where the family lived for four years.

John and Faye dove headfirst into the day-to-day operations of the store, creating Mast’s hallmark blend of old-time provisions and candy paired with quality clothing, shoes and outdoor gear.

“The environment was beautiful and restful,” recalls Faye. “Even though we were working very crazy hours and doing a lot of things, our bedroom window looked out at the mountain right there in Valle Crucis.”

The venture was a new one, but drew on John’s sales experience and Faye’s background running a cathedral bookstore. By 1982, the Coopers expanded the Valle Crucis store into the Annex building just down the road, and in 1988 they opened a store in a historic building in downtown Boone, N.C.

“One of the things that we really inscribed in ourselves early on was quality goods, fair prices and friendly service,” John says.

Their daughter Lisa Cooper is now president of the company, and John and Faye radiate pride when talking about her commitment to customer service, the staff and the communities where each store is based. In addition to the two stores in Valle Crucis, Mast General Store now includes eight other locations in Tennessee and the Carolinas — all located in restored historic buildings.

The Coopers encourage each store to engage in their community. In addition to the charitable efforts their business supports, John and Faye Cooper donate their time and financial resources to a host of causes.

“We ended up finding ourselves giving to health and human service issues, to land conservation and environmental issues and then supporting the arts,” John says. “Those areas are the ones that I think need the most help.”

The Coopers also take a hands-on role in some projects. When the Hospitality House of Boone was in need, Faye and John headed the campaign to build a larger facility for the organization, which assists homeless individuals from seven surrounding counties. They have volunteered in various capacities with groups such as An Appalachian Summer Festival, Boone Area Chamber of Commerce, Western Youth Network and others.

“Conservation is critical with our resources,” John says. “And I appreciate so much what Appalachian Voices does, not just here but all over the Southeast.”

John’s profound concerns with environmental issues and the threats of fossil fuels began long before the couple moved to Western North Carolina. In addition to supporting conservation organizations, in 2015 the Coopers donated nearly 22 acres behind the original Mast Store to the Blue Ridge Conservancy. The donation permanently protects the riverfront land and pastoral view that brought them peace during their first years in the area.

Now, the Coopers are putting their energy into revitalizing the Appalachian Theatre in downtown Boone. Since 2011, John has led the capital campaign to purchase and restore the 1938 building, which is expected to reopen in late summer of 2019.

“My first reason for being involved is to bring the stage back for local talent, and when you do that you also provide entertainment for local people,” John says. “I served on the State Arts Council and I saw the importance of revitalizing old theaters in downtowns.”

At a public event outside the theater in August 2017, North Carolina Gov. Roy Cooper (no relation) surprised the Coopers with the state’s highest civilian honor, the Order of the Long Leaf Pine.

“We feel very blessed to be here and to have the opportunity to serve, and we care about a lot of different areas,” says Faye. “And so that’s why we do what we do, because we care.”