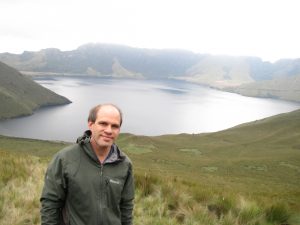 Since he was 12 years old, Ivan Samuels has found a sense of wonder and appreciation for birds and their habitats.

Ivan grew up in San Francisco and attended college on the West Coast. His interests during that time morphed from natural history, ecology and conservation biology to the tropics and the study of its avian wildlife. Ivan maintained his recreational interest in birds and his commitment to conservation throughout his college years, and was impassioned to learn how birds are intricately tied to the overall health of their surroundings.

“Birds are often an indicator species of how well a conservation program is working in an area,” says Ivan. “Bird conservation can apply to protecting animal life in general since one must conserve bird habitats, which in turn helps conserve other species.”

Ivan’s favorite winged creatures to study are neotropical birds, or those from the Latin American tropics. He has spent time working and researching in Costa Rica, Mexico, Peru, and most recently in Ecuador, where he works closely ― both remotely and side-by-side ― with an organization that protects the country’s threatened birds. And, though he is removed from the Appalachian mountains back in the States, his enthusiasm for the area’s wealth of animal and plant species, and their need for conservation, is vibrant.

Ivan explains that Appalachia is quite diverse in its trees and salamander species, and he feels that energy extraction in the region is devastating to the unique medley of animal and plant life found here. “Appalachia is an area of great cultural heritage as well,” he says, adding that people’s lives and personal stories are being uprooted by the current pursuit of coal. “Mountaintop removal is a tragedy on every level.”

Ivan feels the best way to offer protection to an area is not always obvious. “People say ‘think globally, act locally,’ and while that’s a helpful way to think, it is not enough in many cases. When an industry is so powerful, such as that of coal, Ivan notes, equal levels of local and national legislative work are crucial to conservation efforts.

Ivan still lives in San Francisco where he works for the March Foundation, a non-profit organization with programs that support higher education and human welfare. Through the foundation, he and his allies help support ornithological research by aiding a variety of partners that study birds.

People can come to conservation projects from all backgrounds, Ivan says, and in turn they not only help protect the local wildlife and plant life, but also help revitalize the quality of living for people who call those places home.