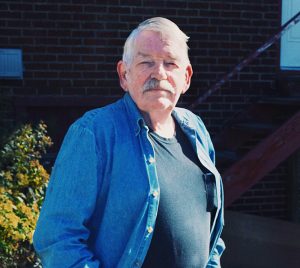 Many at Appalachian Voices know Dean as our biggest volunteer distributor of The Appalachian Voice. Starting in 1998 with an initial run of fifty copies, he’s since gone on to distribute anywhere from 5,000 to 7,500 copies of each issue. Lauren Essick, our distribution manager, recalls how “he’ll push down the seats in his car and cram copies into every little space he can,” before setting off on his circuit, encompassing five locations around Mountain City, Tenn., with a sixth to be added this year. But Dean has worn many hats, and distributing the Voice is just a part of what this retired chemical engineer has done.
Having served variously as campaign organizer for the Sierra Club, member of the Appalachian Voices Board of Directors and treasurer for Cherokee Forest Voices, Dean’s environmental credentials are impressive. It may then come as a surprise when he mentions the movies he still does occasionally, “if the story is compelling.”

That’s right. Though his degree is in chemical engineering, Dean’s real passion is acting.

He’s appeared in nearly 40 films, including Tony Minghella’s film adaptation of Charles Frazier’s Cold Mountain. “Your best chance of seeing me is when the credits roll,” he laughs. Look close and you’ll catch him in the scene where Inman gets a shave before his homeward journey. The barber who shaves him? That’d be Dean.

How, then, did Dean take on his current role as seasoned advocate? “Well, it started in my backyard,” he says. His cabin is situated on 16.5 acres right on the Cherokee National Forest boundary near Mountain City. Two hundred feet of old access road passes through his land, leading up to a grove of national forest standing just beyond his property line.

“Well, one day I came out to find a man had showed up and was standing out there looking up at that stand of trees,” he says. The man said he was a logger planning on using Dean’s access road to move his crew and equipment in to cut the grove for timber. “I don’t think so,” said Dean. The logger nodded and said “We’ll see,” returning with the sheriff and a lawyer the next day.

Dean won the ensuing lawsuit—as the current landowner, he had the right of way—but knew his victory was only temporary. “I knew they’d keep trying,” he said. And so Dean added the advocate’s hat to his repertoire; for him, it’s since become far more than just another role to play.

“The first rule of good tinkering is never throw away the pieces,” he says, taking a line from conservationist Aldo Leopold. “And I’m there to make sure we have all the pieces.” There’s that smile again, with a wicked flash in the eye. Rest assured, Dean Whitworth will keep on doing what he does best: protecting the Cherokee National Forest, no matter which hat he wears.