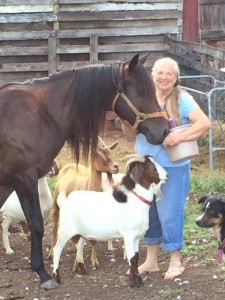 Carol Rollman with some of her barnyard companions.

Carol Rollman, admirably referred to by customers as “Farmer Carol,” is the cheerful and amicable owner and operator of Sycamore Spring Farm in Frederick, Md., where she also distributes The Appalachian Voice to her customers. Sycamore Spring is a sustainable farm that doesn’t rely on the use of pesticides and fertilizers to grow crops. Carol suggests that this method of farming produces safer, higher quality crops.

“The farm is all about repurpose, recycle, sustainability,” Carol said. “I thought your paper fit right in with my customer base.”

Sycamore Spring Farm is a vibrant 63-acre diversified homestead farm on which Carol raises heritage breed animals including Scottish cattle, Silver Appleyard ducks, and American Blue rabbits. Carol believes that raising heritage breeds is important because they have been a staple in the farming community until recently, when modern food production cornered the market with specialized breeds.

Carol’s cattle are marketed as “Better than Organic Beef,” and she raises several species that, if it weren’t for farmers like Carol, would likely be extinct. Due to popular demand, Carol started delivering her farm goods such as meat and produce this year.

“It’s an educational process for folks to know what they’re going to eat and where they get it from,” Carol said.

Throughout her life, Carol has said that a love of farming must be in her blood. Perhaps it is due to her great-grandfather, Archibald Sparks, who owned Arch Sparks farm and mercantile store in Canebreak W.Va. and ran a home delivery service. Or maybe her love of farming was instilled when she was 13 and visited her grandfather’s farm, a Scots-Irish Clan land grant in southwest Virginia that was given to her family in 1855. 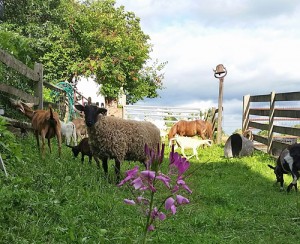 “I fell in love with that property and hearing how they lived,” Carol said. “I remember asking my grandfather at age 13, ‘Can I please have your part of the farm?’ He said, ‘You don’t want that, that land will kill you. It killed my family.’ If only my grandfather and his family knew what we know now, it wouldn’t have been as difficult for them.”

Carol has farmed her whole life, but before she made her living off of farming, she was in the medical field. She had a vascular ultra stenographer’s certification, and looked inside people’s arteries so she could suggest ways in which they could live healthier lives. Carol was discouraged, however, because she found that most people she treated didn’t want to hear that they were unhealthy, and they weren’t willing to make changes. But when she left the medical field and started farming, she began attracting people who really did want to take care of their health.

“It’s almost as if my health care profession came full-circle with the farm,” Carol says.

Although Carol knows many new farming techniques that have made her job easier than it was for her grandfather, she has by no means cast aside what she knows to work. In addition to her heritage breeds, Carol also raises English Shepherds, or as she calls them, “the original, multi-purpose farm dogs,” which are the same type of farm collies that farmers used during the 1800s and early 1900s.

Carol did inherit her grandfather’s farm, and she hopes to someday retire there and raise honeybees.

“There is no honey better than honey you can get on the mountain,” she says.