Bruce Gould and Kate McClory are self-proclaimed “tree-huggers.” Although both are from the Boston area originally, the couple has lived in Richmond, Va., since 1980. Kate got her first taste of nature at Girl Scout camp. Now, she says, their connection to nature comes from walking the trails near the James River, which they can see from their house. “Even though we live in the city, we get to really experience nature every day,” says Kate. 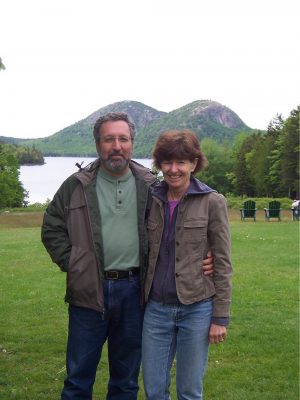 An avid reader, Kate works as a librarian. Bruce retired from his position as the executive director of the Virginia Motor Vehicle Dealer Board and now spends his time volunteering, playing music and gardening. When Kate retires, the couple plans to become more involved with the Sierra Club, which they have been members of for nearly 40 years.

A passion for the outdoors was natural for the couple. “We just care about the environment that we live around, the water and air quality,” says Bruce. “We just make sure we want to leave a good Earth to our daughters and generations going forward. I have a degree in Earth Science; I’ve always been interested in the environment around us.”

Instilling this appreciation for nature in their two daughters as well was important to the parents. Bruce describes a six-week-long cross-country road trip the family took years ago, where they visited parks across the country. “They’re just so beautiful,” Bruce says. “They just need to be maintained and preserved. I think that helped give [our daughters] an appreciation for the environment. That’s just something that’s always been with us.”

Bruce and Kate are also advocates for alternative energy. The Virginia residents speak of their distaste for the Mountain Valley and Atlantic Coast pipelines.

They are also passionate about housing, education and healthcare for all. The couple hopes to see more sustainable jobs and tourism, and wants to see people from diverse backgrounds getting more involved in the outdoors as well.

Bruce enjoys conversing with people who pick up the Voice from their distribution location — a local health-food store in Richmond — where the stack of papers often needs to be replenished every ten days.

“I feel like I’m doing my little part to educate people about environmental issues related to Appalachia, and the way [The Appalachian Voice] flys off that newsstand, people must be interested,” says Bruce.