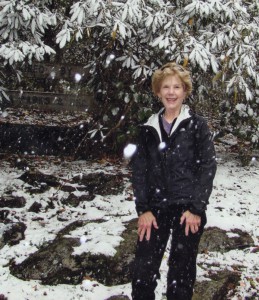 Growing up on a farm in Lincoln County, N.C., Brenda Sigmon intimately knew the outdoors and understood her natural surroundings as a part of everyday life. “I think I didn’t like it at the time because of the chores I had to do,” says Brenda fondly, “but looking back, it was an idyllic experience.”

A “childhood outside,” as she puts it, is something Brenda feels she is lucky to have had, and it’s something she hopes today’s children can experience as well.

An avid hiker, Brenda spends much of her efforts getting children outside and on trails to combat “nature deficit disorder,” an issue she became more aware of through Richard Louv’s 2005 book, “The Last Child in the Woods.” Brenda emphasizes that getting kids outside not only lets them appreciate their natural surroundings, it helps prevent childhood obesity and diabetes.

Brenda aids in the building of the Blue Ridge Parkway Foundation’s “TRACK Trails,” often extensions to existing trails which emphasize family and adolescent-use. She is helping now to extend such a trail on Elk Knob.

While on a hiking trip years ago, Brenda picked up an issue of The Appalachian Voice. She became a member of Appalachian Voices 1999, began actively volunteering in 2002, and served on the organization’s board from 2006 to 2012. “When I first came there were five staff members and only the Boone office,” she says. “The fact that three of those five are still with the organization today after more than a decade speaks volumes.”

Brenda attributes the organization with making local health and environmental concerns into national issues. Ten years ago “mountaintop removal” was just words, she says, but now much of the country knows about the devastation in the region’s coal-bearing states “thanks to Appalachian Voices and its allies.”

She is inspired by the team’s level of commitment and offers that she’s “never met more dedicated or talented people.” Appalachian Voices is always grateful for volunteers like Brenda who keep us motivated.

Brenda lives in Conover, N.C., where she is a volunteer distributor for The Voice in Burke and Catawba counties. She avidly hikes and continues to champion ways for children to pursue and draw joy from nature. “Children who learn to love the outdoors,” she says, “will be the people who grow up to protect it.”