If weather permits and the Moormans River is running clear, Bob Belton can usually be found somewhere along its banks casting a fly rod. Spending time on the water in the Virginia mountains gives him an intimate perspective on the conditions of the regional streams, and seeing them jeopardized by coal-related pollution motivated him to join Appalachian Voices. 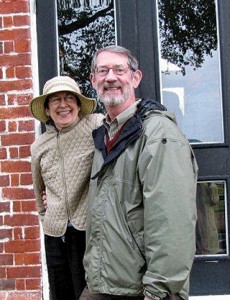 Bob Belton and his wife, Celia, at a house tour on Virginia’s Northern Creek.

Bob, who lives in Charlottesville, Va., openly states his contempt for mountaintop removal coal mining. He says that he is “incensed to see what these people are doing to the headwater streams. It’s just unbelievable that anybody could have [such a] narrow and so greedy a point of view as to be engaged in this unacceptable activity.”

A growing population of informed readers support our fight for clean air and water, and Bob, now retired, does his part to ensure that this growth continues. He has been a volunteer distributor for The Appalachian Voice since 2012 and he will continue to deliver the paper so that others might learn about the hazards of coal. Throughout his lifetime, Bob has watched as the headwaters of streams were disfigured by mountaintop removal coal mining, and he has seen how the harmful emissions from coal-fired power plants have significantly degraded water quality.

A lifetime member of Trout Unlimited, Bob served as council chairman of the Virginia chapter and was involved in the organization’s efforts to mitigate the effects of acid rain on the state’s wild brook trout populations. Because of sulfur dioxide and nitrogen oxide emissions from coal-fired power plants and other industrial sources, many of Virginia’s streams were subject to noticeable increases in acidic deposition, especially before amendments to the Clean Air Act were made in 1990 to reduce these emissions. This pollution motivated members of Trout Unlimited and environmental scientists from the University of Virginia to conduct the ongoing Virginia Trout Stream Sensitivity Study, which measures the direct effects of increased acidity on native brook trout populations.

Bob remembers swimming in the Smith River near Bassett, Va., as a child. In particular he recalls how “it was so clear you could read the words on a dime in three feet of water,” but as he grew up, “it got so polluted that the banks were multi-colored.”

According to Bob, his childhood river has been cleaned up since then. He is proud to say — at the risk of divulging a good fishing spot — that “the Smith is one of the finest trout streams around,” although he is unable to fish it as much as he does the nearby Moormans River below Sugar Hollow Reservoir.

The Smith’s rebound is a testament to the resiliency of rivers. There are countless streams in Appalachia that are currently at risk for pollution, and miles of headwaters have already been contaminated, but these waterways can recover with the help of environmental stewards like Bob Belton.