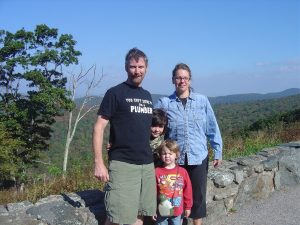 Betsy Shepard of Surry, Virginia is a dynamo. In addition to helping her husband run their own business and keeping both her home an impressive in garden shape, she home schools her two boys, takes them to countless baseball games and practices, on educational trips and gracefully executes the thousands of daily tasks that come with motherhood, home ownership, sole proprietorship – and fighting a coal plant.

Back in 2008 the people of Surry County, Virginia heard that their rural county of 7,000 was selected to house what would be the largest coal-fired power plant (and one of the largest polluters) in the state. Since then, Betsy has become a leader in the effort to stop this massive proposal from becoming a reality and slowly poisoning not only her own family, but the millions of people who live in the region downwind that includes Virginia Beach, Williamsburg and Norfolk, known as Hampton Roads. Though reluctant to be in the spotlight or be considered any kind of leader she couldn’t help but to stay on top of every development and to make sure everyone in the continually growing movement was up to date and knew how to be the most effective. She organized phone trees, letter writing efforts, countless meetings and potlucks, got increasing numbers of people to hearings and court cases. She spoke or found people to speak at press conferences and became the go-to person for information, for the press, for campaign materials and more for the last three and a half years.

Betsy certainly didn’t do all this alone, it was very much a community effort and there are many people who put blood sweat and tears into this fight. But many of our successes would not have happened without her dogged tenacity. Thanks to her the fight was more organized, the activists were better educated, and the potlucks far more fun than they would have been without her.

Earlier this month the utility proposing the project (The Old Dominion Electric Cooperative or ODEC) announced that they have suspended their last pending permit! Though it is possible that they could attempt to apply for permits in a few years, ODEC would have to attempt to get permitted in a region with a populace that is aware, educated, and poised to fight them at every step.

Betsy Shepard is many things, and an Appalachian Voices member is just one of them. We are glad to have been able to support her, and to be supported by her over the years.