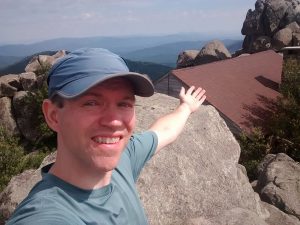 Ben Bristoll stands on top of Sharp Top Mountain at Peaks of Otter in Virginia.

Ben Bristoll has been an ally of the Earth since he was a child.

“What got me into environmentalism in the first place was growing up in a rural area in Upstate New York in the Hudson Valley on an old farm,” Ben explains. He describes a patch of woods across the street that he used to play in as a kid. “One day my neighbor across the street went and clear-cut the trees in there, and I was really angry to have my woods destroyed like that,” he says.

To Ben, this event was a small-scale example of what goes on when corporations destroy a landscape for profit. This glance at corruption fueled the fire for Ben’s environmental and social activism throughout the years.

With a bike basket and a dedication to clean energy, Ben distributes The Appalachian Voice across Roanoke, Va., on two wheels. He has biked up to 25 miles to distribute the publication, and delivers four hundred copies of each issue. “I have a big basket on the back of my bike and it will hold two of those big bundles of paper,” he says. “When I got this bike basket, I thought, ‘why not just deliver The Appalachian Voice that way, too?’”

“I’ve been trying to live a lifestyle where I walk or bike everywhere,” Ben says. “There are few places in the Roanoke Valley that I will not bike to.”

Ben practices a sustainable lifestyle for health and environmental reasons.

“I’m most passionate about living simply and trying to live as low a carbon lifestyle as possible,” he says. Ben is also enthusiastic about the switch to renewable energy sources and the eventual phase-out of coal.

Ben’s interest in environmentalism also led him to open Compact Cinemas, a small theater in Roanoke where he showed weekly TED Talks, many of them focused on environmental justice issues, followed by a group discussion.

The most recent TED Talk Ben showed was so touching that it actually brought him to tears.

“The last one I did was about how trees in the forest communicate with each other through their roots,” Ben explains. “A big tree will direct nutrients to a smaller tree that is its offspring. The mother tree actually knows who its children are and sends nutrients to help them,” he says.

Unfortunately, the theater had to close in April, but Ben plans to show films in the future at a shared space downtown.

Along with showing films about environmentalism and sustainability, Ben will continue to deliver The Appalachian Voice on his bike while living a low-carbon, low-impact, and Earth-friendly lifestyle.