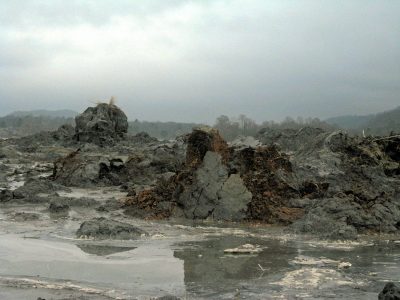 On Dec. 22, 2008, a massive dam failed at the Kingston coal-fired power plant in Harriman, Tenn., owned by the Tennessee Valley Authority. Some 1.1 billion gallons of coal ash sludge flooded across nearby fields and into the Clinch and Emory rivers. The disaster, which covered more than 300 acres, damaged homes, wiped out thousands of fish and clogged the waterways with toxic sludge. It was larger than the Exxon Valdez spill.

The catastrophe drew national attention to a danger that until then had been largely unknown and out of sight. Coal ash, the waste from burning coal for electricity, has mostly been mixed with water and stored in huge, unlined impoundments held back by earthen dams, like the one at the Kingston facility. The ash contains toxic heavy metals including arsenic, lead, mercury, selenium and chromium.

Appalachian Voices was on the scene of the TVA spill within a day, teaming up with Southwings to chronicle the disaster from the air. We also took to kayaks and canoes on two separate occasions to conduct independent tests of the river water and fish for pollutants, and followed up with community members and organizations at the scene to track the cleanup in the weeks and months that followed.

The U.S. Environmental Protection Agency determined that 140,000 pounds of arsenic had contaminated the waters, and TVA undertook a $1.2 billion cleanup. It hauled much of the ash to a landfill in Alabama and left some 50,000 cubic yards in the Emory River, saying it would be less environmentally harmful if left in place. It bought 180 parcels of private land, and is required to monitor wildlife in the area for the next 25 years.

Since that day, several significant coal ash spills have happened, in places like Widow’s Creek, Ala., and Oak Creek, Wis. And then in North Carolina. 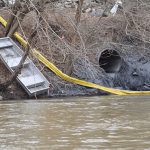 The point of failure was an old pipe. 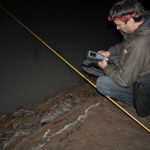 Dr. Matt Wasson tests water from the Dan River the night of the spill. 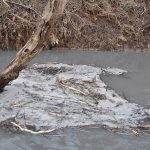 Ash coated the river for miles, stretching into Virginia.

View additional images of the spill

On Feb. 2, 2014, a stormwater pipe at a shuttered Duke Energy coal-fired power plant in Eden, N.C., collapsed, sending 39,000 tons of coal ash and 27 million gallons of contaminated water into the Dan River near the Virginia border. Mounds of coal ash five feet high floated near the site, and ash coated the river bottom for miles, killing turtles, mussels and other wildlife. Traces of the toxic waste were eventually found more than 70 miles downstream.

Again, Appalachian Voices was on the scene within hours, documenting what turned out to be the third largest coal ash disaster in U.S. history. Our water quality samples revealed contaminants such as lead, iron, manganese and arsenic exceeding state and federal drinking water standards. It took crews nearly a week just to stop the spill.

In the weeks and months following the disaster, the all-too-cozy relationship between the utility and the state regulators (under the administration of Governor Pat McCrory, who had previously worked for 29 years at Duke Energy, owners of the closed plant) came to light in a torrent of local and national media reports. The U.S. Attorney’s office launched a criminal investigation and a year later, in February 2015, reached a plea deal with Duke for $102 million.

The crisis and political scandal amplified a statewide grassroots movement to force the state to do its job and force Duke to clean up its coal ash dumps in North Carolina, all of which had been leaking for years. Under intense pressure from citizens, the N.C. state legislature passed the Coal Ash Management Act in 2014, setting a framework for staggered cleanup of Duke’s 30-plus coal ash pits around the state by 2029. Under the law, the Dan River site is among the first on the priority list for cleanup and must be closed by 2019.

Appalachian Voices remains committed to keeping the spotlight on the problem of coal ash in North Carolina. We are particularly focused on helping N.C. communities located near coal plants to press Duke Energy, the Department of Environmental Quality, the governor and the state legislature to act swiftly to ensure their health and safety.