Years after reaching a compliance agreement with the Virginia Department of Energy, A&G has failed to complete nearly all reclamation obligations at the three mines

After the Virginia Department of Energy issued numerous notices of violations against A&G regarding its failure to comply with reclamation requirements, the agency and the company entered into a 2014 consent agreement that required A&G to promptly reclaim multiple mine sites. A&G failed to perform its obligations under the 2014 agreement.

A&G and Virginia Energy have now repeatedly amended the 2014 consent agreement to add mines and extend deadlines as A&G continues to repeatedly and flagrantly violate deadlines. Meanwhile, the mine sites remain unreclaimed, causing concern for local residents, including members of the citizens groups. 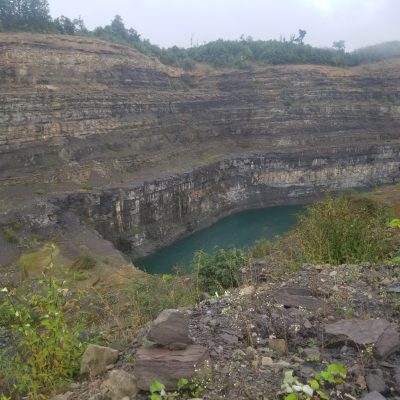 This A&G Coal mine, permit 1101914, is one of three permits that A&G Coal has failed to properly clean up, leading Appalachian Voices, Southern Appalachian Mountain Stewards and Sierra Club to file suit. Photo by Matt Hepler

Prior to 2013, A&G had regraded about 275 acres out of nearly 600 acres of disturbed land at the Looney Ridge Surface Mine #1 (permit no. 1101905), according to Virginia Energy reports. In 2013, Virginia Energy issued a violation against the company for failure to conduct adequate reclamation at Looney Ridge. When A&G failed to address the violations, the agency set reclamation deadlines for Looney Ridge and a second, much larger, mine covered by permit 1101914 in a 2014 compliance agreement.

For all three mines, proper reclamation would address environmental harms caused by the company’s mining operations and provide badly needed jobs in an economically distressed area.

“For over a decade we have been working to shine a light on the destructive impacts of poorly managed surface mining projects in our communities, including the site at Looney Ridge,” said Garrett Blaize of Southern Appalachian Mountain Stewards. “We have seen firsthand that there has been no reclamation progress at the mine until just last year, when we began participating in citizen inspections of the site.”.

State regulations require mine operators to engage in “[r]eclamation efforts, including but not limited to backfilling, grading, topsoil replacement, and revegetation, on all land that is disturbed by surface mining activities” as soon as possible while mining is taking place.

“Mines need to be reclaimed in a timely manner because delays have real consequences,” said Matt Hepler, environmental scientist at Appalachian Voices. “As mines sit idle, conditions on the mine can deteriorate, ultimately making cleanup more expensive, and creating potential hazards for communities who live under the mine.”

State regulations, which mirror federal requirements, also require contemporaneous clean up in order to ensure that as much reclamation occurs as possible while mining is active so that coal companies don’t leave taxpayers on the hook for reclamation costs by using the bankruptcy laws to avoid their reclamation responsibilities.

Coal companies are also obligated to provide reclamation bonds to cover cleanup costs in the event the company abandons its mines. In 2014, Virginia discontinued the use of the most risky form of bonding — self-bonding, where coal companies give their word they will provide cleanup funding, without providing any actual money. A&G’s self-bonds were never replaced with more secure bonds.

“As demand for coal continues to decline, it’s more important than ever that the reclamation and bonding requirements at the heart of our surface mining laws are strictly enforced so that the reclamation work actually gets done and these costs aren’t passed along to the nearby communities,” said Judy Gayer, legal chair for Sierra Club’s Virginia Chapter.

In 2016, Virginia Energy (then the Department of Mines, Minerals and Energy) estimated the cost to reclaim these three mines was about $95 million. With hardly any clean-up activity on two of the mines and only some clean-up on the third, combined with deteriorating conditions, it’s unlikely that estimates would be significantly lower today.The mines are all self-bonded, with A&G having put up just under $9 million to cover reclamation costs if the company goes bankrupt.

The 1977 U.S. Surface Mining Control and Reclamation Act allows citizens to sue coal companies to compel them to come into compliance with the law, after giving them 60 days notice.